Wray and family face IRS liens and other legal actions 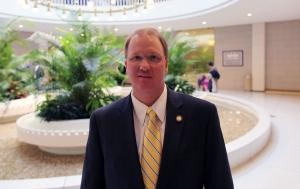 State Rep. Michael Wray, a Democrat from Gaston who serves as deputy minority leader in the state House of Representatives, owes more than $100,000 in past-due federal, state, and local taxes, according to public records on file in Northampton and Halifax Counties.

Wray has business interests that are intertwined with those of his father, Harold Wray, who has accumulated approximately $150,000 in past-due federal and local taxes of his own. As of June 6, the Wrays or their businesses owed thousands in federal income taxes, North Carolina unemployment insurance taxes, and property taxes in Halifax and Northampton counties, which comprise House District 27, which Michael Wray represents.

In February, the IRS filed two liens on Michael Wray’s property, seeking to collect $83,979 in unpaid federal taxes. At the same time the IRS filed three liens on his father’s property for unpaid taxes totaling $98,505.

In addition, Harold Wray has past due property taxes exceeding $50,000. The family’s tax problems are surprising because records show they own several small businesses and a significant amount of real estate. The individual amounts due to different government jurisdictions range from substantial sums of more than $10,000 to relatively trivial personal property tax bills, unpaid for four years, totaling $163.

Carolina Journal has been unable to determine a reason for the delinquent taxes because Michael Wray has not responded to several phone messages and emails.

Late Monday afternoon, Democratic political consultant Brad Crone called CJ to say that Michael Wray’s taxes were paid. That call soon was followed by another from Wray’s attorney Thomas Wellman, who also said Wray’s taxes were paid. Neither offered any proof of payment nor any reasons why the taxes had been delinquent prior to inquiries from CJ. (See Editor’s Note at the end of this story.)

Wray is not the only Democrat to face recent tax problems. Former state Rep. Deb McManus of Chatham County resigned from the General Assembly in December after she was arrested on felony tax charges. She was charged with three counts of embezzlement of state individual income taxes totaling more than $47,000 over a two-and-a-half year period ending in July 2013. The money came from her husband’s medical practice, where she served as the bookkeeper.

Wray is serving his fifth term in the General Assembly, and in May he won his party’s primary, defeating the Rev. Franklin Williams Jr. of Weldon. He has no Republican opposition in the November general election.

Wray’s recent campaign benefited from an independent expenditure from “Mainstreet Merchants for a Better North Carolina,” an organization affiliated with the North Carolina Retail Merchants Association. The organization reported spending $1,972 on March 26 to buy billboard messages supporting Wray. “Michael Wray for House District 27 — a Strong Leader Who works for All Of Us,” was the message, along with a photo of Wray that appeared on the billboards.

Wray, in addition to serving as deputy minority leader, serves on several key committees in the General Assembly. He is vice chairman of the Regulatory Reform Committee and also serves on Appropriations, Environment, Health and Human Services, and Commerce and Job Development committees.

In campaign literature and online biographies, Wray describes himself as a small business owner. His business interests include Gaston Hardware, Wray’s Sheet Metal LLC, and Frazier’s Restaurant. He also buys and sells land and receives rental income from various farm properties. The Northampton County Register of Deeds index shows, since 1991, Wray as a grantor or grantee in approximately 120 deeds. On his most recent Statement of Economic Interest, received March 12 by the State Board of Elections, Wray lists 76 North Carolina properties in which he has an ownership. His wife and parents are co-owners of many of the businesses and properties.

On Feb. 18, the IRS filed two Notice of Federal Tax Lien documents with the Northampton County Clerk of Superior Court, naming Michael Wray as the delinquent taxpayer. The documents indicate that for 15 consecutive quarterly periods from the beginning of 2009 through September 2012, Wray short-changed the IRS. The documents do not specify which of Wray’s businesses is associated with the past due taxes. Wray, according to the IRS, currently is responsible for a total of $83,979 in unpaid federal taxes, interest, and penalties.

Wray’s father Harold is responsible for $98,505 over the same period.

“We have made a demand for payment of this liability, but it remains unpaid,” states each document signed by federal Revenue Officer Robert Johnson. “Therefore, there is a lien in favor of the United States on all property and rights to property belonging to this taxpayer for the amount of these taxes, and additional penalties, interest, and costs that may accrue.” The liens give the IRS a first claim on the proceeds of the sale of any of the real estate parcels the Wrays own, but they do not prevent the Wrays from selling any of their property, businesses, or other possessions to settle their debt with the IRS.

The Wrays also had problems keeping up with their state tax obligations. In 2013, the Division of Employment Security in the N.C. Department of Commerce filed five separate “Certification of Unemployment Insurance Tax Delinquency” notices with the Northampton County Clerk of Superior Court, naming Wray’s Sheet Metal as the delinquent payer. Those notices total $5,677 in taxes, interest, late payments, and court costs.

The delinquent periods include the fourth quarter of 2011, the first through the third quarters of 2012, and the second quarter of 2013. Unemployment insurance taxes are used to pay benefits to qualified unemployed workers. Four of those delinquency notices were satisfied in June after CJ began investigating the Wrays’ taxes.

Collecting property taxes from Harold Wray has been a challenge for local government. Northampton County has filed a legal action against him on six separate occasions since 1989. The most recent complaint, filed in June 2012, involved 14 parcels with unpaid taxes totaling $9,326. A July 2009 judgment against Harold Wray involved 18 parcels with unpaid taxes totaling $6,404.

The town of Gaston also has had to use legal action to collect from Harold Wray. A June 2013 judgment stated that Harold Way and his wife Shirley owed the town $113,000 in unpaid property taxes from 2006 through 2010 involving five parcels.

Michael Wray, his family members, and business associates have received significant subsidies from the U.S. Department of Agriculture as well, according to the Environmental Working Group’s farm subsidy database. EWG is a Washington, D.C.-based nonprofit research organization that tracks federal farm subsidies.

From 1995-2012, Michael Wray was the 10th-largest recipient of USDA subsidies in Northampton County, receiving a total of $169,435 for conservation projects and peanut subsidies. He received $570 per year conservation subsidies from 2009-12 — the same years he was not paying some federal taxes.

A separate business entity named Dunlow and Dunlow received $7,732,656 in USDA subsidies for activities in Northampton and neighboring counties. According to the website, David and Debra Dunlow own that entity.

In May 2011, Wray sold a 173-acre tract of land in Greensville County, Va. He purchased the property in 1999 and co-owned it with his wife Kay, and business partners David Dunlow and his wife, Debra. CJ was unable to determine the sales price.

In July 2013, Michael Wray sold a 79-acre parcel of land, also in Greensville County, Va., for $164,290. He bought that land in 2002 and co-owned it with his wife and the Dunlows. According to the county tax office, the couples no longer own land in Greensville County.

Public records also show that Michael Wray and his associates have negotiated approximately $3 million in loans since June 2011. Deeds of trust signed by Michael Wray, his father, their wives, or the Dunlows, since June 2011 involve seven loans, with the largest for $2 million in November 2013.

In September 2013, the News & Observer of Raleigh raised questions about another money matter involving Michael Wray. Wray’s campaign finance reports showed that he spent more than $28,000 on gas from July 2011 to June 2013. According to the N&O, the 427 fuel purchases suggested Wray claimed more than 100,000 miles of travel in his sport-utility vehicle.

Legislators receive a per diem payment of $104 for each day the General Assembly is in session to cover food and lodging. Payments also cover Fridays, Saturdays, and Sundays — days when the legislature often is not meeting. That amounts to $749 a week for food and lodging.

In addition, lawmakers are reimbursed for one round-trip per week between their homes and Raleigh.

Please be advised that there are no outstanding taxes to the federal or state government owed by Mr. Wray, individually, and all prior tax liens have been released. Furthermore, all ad valorem property taxes for which Mr. Wray is responsible are current.