RALEIGH — A three-judge Superior Court panel has blocked the overhaul of the State Board of Elections until the case can go to trial or unless a higher court overturns a preliminary injunction.

Earlier in the day, Superior Court Judges Jesse Caldwell of Gaston County, Logan Todd Burke of Forsyth County, and Jeff Foster of Pitt County heard arguments from attorneys for Democratic Gov. Roy Cooper and leaders of the GOP-controlled General Assembly — Senate leader Phil Berger of Rockingham County and House Speaker Tim Moore of Cleveland County — over a part of Senate Bill 4, which lawmakers passed during one of the mid-December special sessions.

“The statutory scheme enacted there violates Article I Section 6 of the North Carolina Constitution, which declares that the legislative, executive, and supreme judicial powers of state government shall be forever separate and distinct from each other,” Jim Phillips, one of Cooper’s attorneys said.

“The separation of powers clause requires that as the three branches carry out their duties, one branch will not prevent another branch from performing its core functions,” Phillips continued. 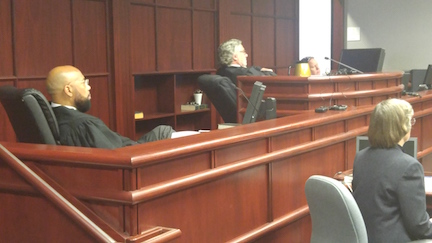 A panel of three Superior Court judges decided Thursday to delay the implementation of a law revamping elections oversight until a lawsuit went through the judicial process. (CJ photo by Barry Smith)

Noah Huffstetler, one of Berger’s and Moore’s attorneys, said the courts have long recognized the importance of independent agencies within the executive branch of state government.

“The State Board of Elections, by design and jurisprudential approval, is set up to be as much as possible free of influence of other officials,” Huffstetler said.

Martin Warf, another attorney for Berger and Moore, said that the day-to-day operations of a revamped State Board of Elections staff would be similar to the one already existing.

“Governor Cooper, as Mr. Huffstetler has pointed out, could not supervise the day-to-day administration of the State Board of Elections,” Warf said.

“I am saying that,” Warf said. “I think that what’s this session law says.”

The three judges were appointed to hear the case by N.C. Supreme Court Chief Justice Mark Martin. They plan to schedule a trial on the law at a later date.