It happened so quickly.

Then, she was lured into a prostitution ring.

Anderson, one of four adopted children, had a good home life. But she felt like an outsider, a perception she attributes to her dark skin and unique personality.

She met her traffickers at age 19, and, as odd as it now sounds, Anderson found a place to belong.

“[I was at a nightclub] and this girl came up to me and pulled out $2,000 or $3,000,” Anderson said. “She told me that I could get that much. She told me that it was easy, so I met her whole team. At the time I met the person that I thought was her boyfriend. But it was her pimp.”

“At the time, they took care of me, and gave me a small sense of protection and love.”

Until the violence began. Until she became trapped.

“The pimp asked me to do something for him. He asked me to go see somebody and sleep with him for money. It was like I owed him that.”

Anderson was introduced to drugs and became addicted. She was trafficked in Charlotte, Washington, D.C., and many other U.S. cities.

Always under guard, she was forced to have sex with 15 or 20 men each day. Underfed and under the influence, she lived in delirium. She rarely knew where she was — or how much time had passed.

“I was just broken. I just wanted to be done,” she said. “And I was also fearful, because I knew that the pimps often got violent, and I was afraid they were going to come up and start shooting, or that there might be a shootout. I was scared … desperate. I wanted out.

In 2016, 181 cases of human trafficking were reported in North Carolina, landing it among the top 10 states for trafficking in the U.S., the National Human Trafficking Hotline reports.

But that data isn’t close to representing the real numbers, said Lanie George, founder of Redeeming Joy, a Charlotte area home for women who have escaped sex slavery.

Charlotte is the largest known hub for trafficking in the state, given its location near Interstate 77 and I-85  — corridors for trafficking — and its status as a center for sporting events and business conventions.

Raleigh and Wilmington, too, are trafficking hot spots, George said.

Calls from North Carolina victims to the hotline have risen nearly 200 percent this year, the N.C. Human Trafficking Commission reported in June.

Victims rarely self-identify out of fear that they will be arrested  — or killed by their captors, a study from the U.S. Department of Justice and the FBI shows.

George knows firsthand what it’s like to live in fear and hiding.

She was born into a Florida sex trafficking ring and forcibly prostituted — from the time she was 3 until she was 17. 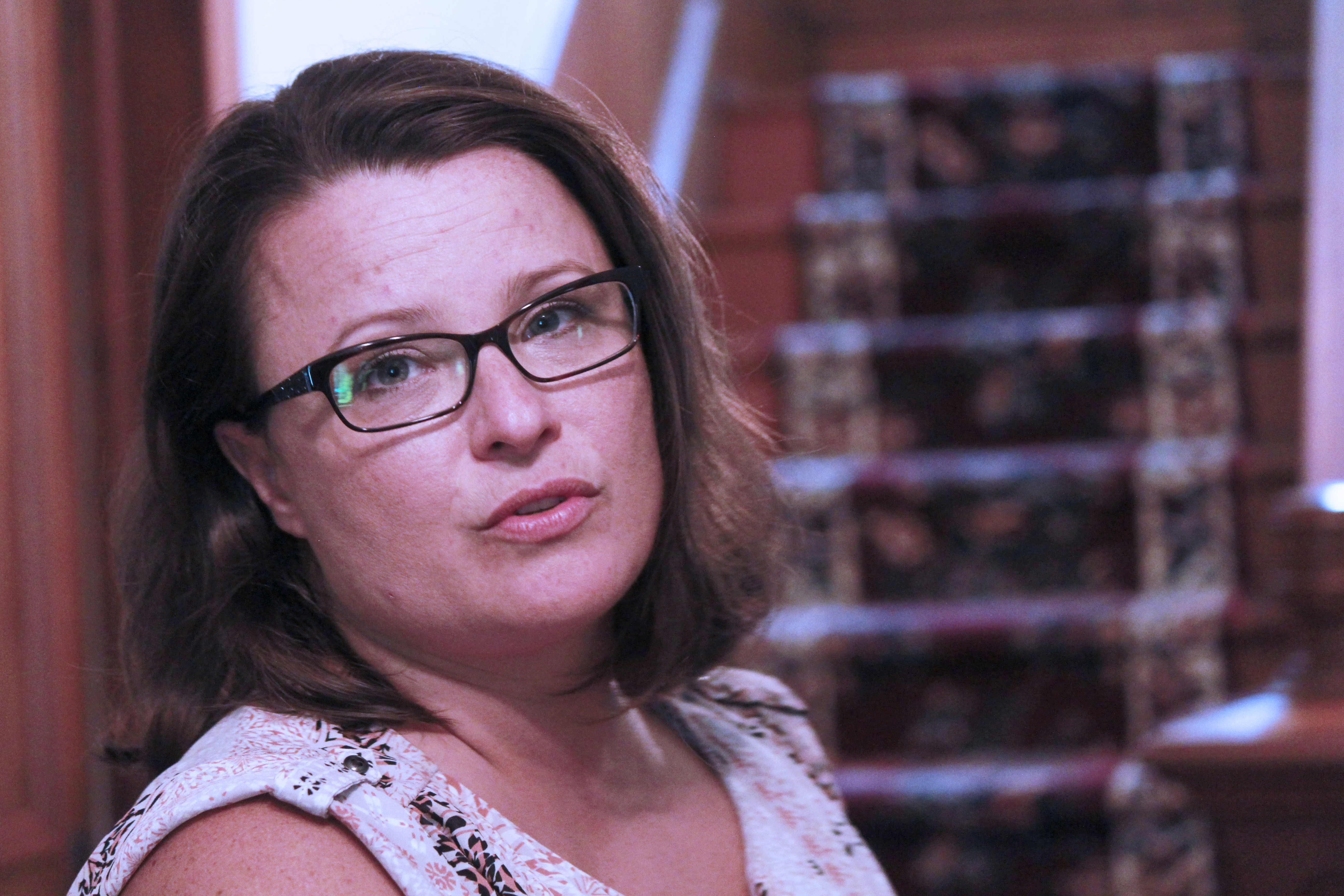 “When I wasn’t in foster care, my school bus would drop me off at my mom’s strip club,” George said. “I would always ask, ‘Why didn’t anybody see? Why didn’t anybody notice?’ I would walk from my strip club to my softball game, and walk back. I [was forced] to do all the sexual acts there in the strip clubs.”

At 7, George tried to kill herself. She credits her survival to God.

“Literally, Jesus became my best friend … and I would go off in my mind and just go somewhere,” she said. “Men would come in at nighttime, I would hide under dirty clothes. I got really good at hiding in places around my house so they wouldn’t find me in my bedroom.”

George tried twice more to kill herself after she escaped her captors.

She’s now a married mother but to this day suffers from post-traumatic stress and dissociative disorders. George says she finds solace in God — and in her mission to rescue and rehabilitate trafficking victims.

George’s mother was her first rescue.

Joy Anderson, after whom George named her organization, was her second.

While trafficking is on the rise in North Carolina, most residents don’t know about the problem, Rep. Bill Brawley, R-Mecklenburg, told Carolina Journal.

Another bill, Senate Bill 548, Strengthen Human Trafficking Laws/Studies, passed the General Assembly just before it adjourned. At press time, Gov. Roy Cooper had neither signed nor vetoed the measure.

The bill also funds public advertisements for the National Human Trafficking Hotline phone number. That provision is included in the state budget, passed by the legislature in June.

House Bill 451, Regulate Massage & Bodywork Therapy Establishments, boosts regulations for massage parlors, which rank behind escort services as the second-most likely front for sex trafficking. Many of its provisions also were included in S.B. 548.

While victim rescue is critical, it’s only part of the solution, George said.

“Once we identify victims, what do we do with these women?” she asked.

Homes and resources for trafficking victims are scarce, in North Carolina, and across North America, including Canada. George turns down multiple women each week.

She simply can’t afford their care.

“It drives me crazy because we do all of these fringe things, but none of those things directly help the women,” she said. “There needs to be a parallel of stopping this, but what happens now when [the hotline] gets the calls?”

“We’ve now had an opportunity to increase identification of our women. We have no equal support in housing or caring for them.”

Law enforcers don’t have a coherent system for breaking into trafficking rings and arresting pimps, said Adam Wilson, a detective with the Gastonia Police Department.

It’s equally tough to identify victims — mostly due to lack of training and to the fact women are afraid to self-identify.

Law enforcers need manpower and resources to tackle the issue, he said.

Wilson, who formerly worked the street and drug crimes beat, is investigating sex trafficking as a special project. Given Gastonia’s proximity to Charlotte, prostitution rings often bleed into his jurisdiction.

Often, such cases are handled on a federal level. Even then, prosecuting perpetrators is tough, since sexual abuse and assault charges yield harsher sentences than do trafficking charges.

A lack of trafficking prosecutions makes it harder to collect data.

It’s time to change that.

“My goal is to figure out resources, figure out investigative practices that actually work, and then find a successful [method of] prosecution,” he said.

“People see how hard it is to do that, and they’re just like, ‘I’m out.’ If I can show people a system I use that is successful, then that’s going to be my goal.”

Getting out is easier than staying out, Anderson said of her escape.

She was rescued in Charlotte — after seven years in slavery.

She remembers crying out to God, desperate for help. 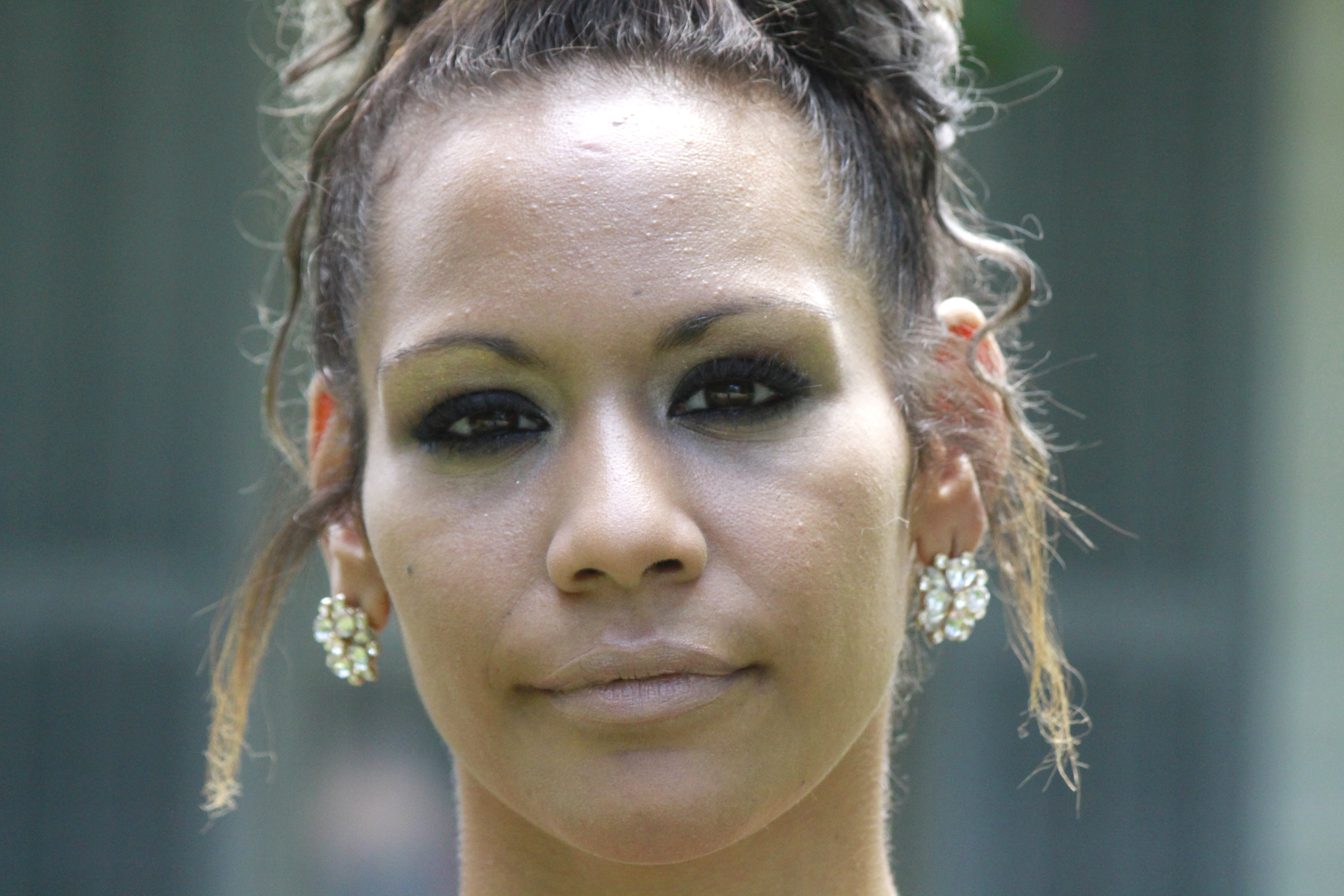 After seven years as a trafficked sex worker, Joy Anderson cried to God for help. Two days later, she was rescued by Lanie George and the FBI. (CJ Photo By Kari Travis)

Two days later, Anderson’s pimps drove her to a hotel, unwittingly handing her over to agents from the FBI, who were working a sting operation.

“I went upstairs [in the hotel] and knocked on the door, and this man came to the door with that silver necklace and a badge around his neck, and he said, ‘Come on in.’ And so I just broke down.”

“[She] told me I could have a new life … that God loved me right where I’m at,” Anderson said.

None of the U.S. or Canadian rehab centers had room for Anderson, so George and her husband cashed in their 401(k) and savings to house and care for the then 26-year-old.

“Having to do that with men everyday of your life [takes its toll] on your body,” she said.

For a time, she struggled to identify herself as a victim. She then became terrified with the prospect of going out in public.

“I was afraid I’d be spotted by a pimp, or their security, or anybody from that life, and that they would kill me.”

Anderson’s experience is the norm.

Only 33 centers in the U.S. cater to such women, Tammy Harris, director of development for Redeeming Joy, told CJ. That equals roughly 100 beds for every 100,000 victims.

Housing for male victims is scarcer still, though that population is tiny by comparison.

To win the fight against human trafficking, legislators must prioritize funding for victim-care centers, especially those that are religious nonprofits, Harris said.

Under Brawley’s H.B. 910, the Department of Health and Human Services would have disbursed money to care centers. DHHS would exclude organizations such as Redeeming Joy because of its faith-based curriculum.

It’s frustrating, says Harris, since the nonprofit — like many others — accepts victims of all faiths.

If the state fails to fund her organization, George will continue seeking money from private donors. She’s got 12 beds but can afford to house only four women.

“There’s such a need for what we have here, and for more of what we have. Because it’s long-term. I still go to counseling every week. I still have night terrors. I’m 45, and have been doing my work for 10 or 15 years now. So it’s long-term. And it’s doable. That’s the most powerful thing. It’s all fixable. [But] you can’t do it alone.”