Why Did Perdue Campaign Not Use Cheaper State Plane?

Campaign could have saved money by renting state aircraft 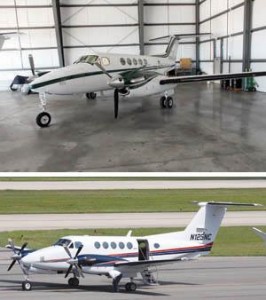 Perdue, who was running for governor at the time, was on the aircraft for only 340 of its 640 miles aloft. Perdue’s campaign committee reported to the State Board of Elections that the flight, chartered by Morganton businessman Charles “Mike” Fulenwider, was paid for by two other Morganton residents — James Fleming and Ola Caldwell — and was recorded Dec. 10 as an in-kind contribution of $4,243.

[Related story: “Elections Board has not interviewed donors about flights,” here.]

If true, for this trip the Perdue campaign chose to spend an extra $2,700 for a flight that, in addition to being more costly, was also more inconvenient and less efficient.

For, while Perdue was using the private plane to get her to Manteo that day, an identical Beechcraft King Air, managed by the state Department of Commerce, and kept at Raleigh-Durham International Airport, sat unused. The state plane, available for use by top government officials, could have been used by the Perdue campaign for $1,500, roughly one third the cost of the Hickory-to-Manteo flight.

The Dec. 8, 2007, flight was not the only occasion the campaign used a convoluted and costly method to transport Perdue by air to political events. Indeed, reports presented to the elections board in June and August indicated several dozen flights that were arranged by donors — many of whom do not regularly provide air charter services — when under a more efficient and transparent system, the campaign would have contracted with and paid professional charter services operating in either the Raleigh-Durham area or New Bern, where Perdue and her husband own homes.

Of nearly 100 flights in 2007 and 2008 reported by the Perdue campaign committee, an investigation by Carolina Journal concluded that roughly 80 were arranged in a similarly convoluted manner.

The Perdue campaign’s flight records show that 20 she took in October and November 2008 were paid for on Dec. 16, 2008 — weeks or even months after they took place. State elections law requires contributions and donations be reported within seven days of their occurrence. The flights were reported several weeks after CJ published its first news story about illegal campaign flights by then-Gov. Mike Easley.

A report presented June 25 to the State Board of Elections by investigator Kim Strach mentioned an arrangement led by campaign finance director Peter Reichard and longtime Perdue friend Trawick “Buzzy” Stubbs to secure “aircraft providers” for the campaign. The system raises questions about why the Perdue committee wasted campaign resources, particularly when her campaign team had more traditional and less costly alternatives available.

A supplemental report Strach presented to the board Aug. 20 suggests that some in-kind donations for flights reported by the Perdue campaign are not accurate. Giving a donation in the name of another is against the law. CJ interviews with those involved also produced confusing or vague answers.

The Saturday, Dec. 8, 2007, flight was arranged by Fulenwider Enterprises, a business owned by Mike Fulenwider that operates several fast-food franchises and other concerns. Fulenwider chartered the flight from Profile Aviation in Hickory.

Fulenwider and his family gave a total of $24,000 to the Perdue 2008 campaign. He also is associated with questionable flights worth almost $10,000.

James Fleming, a barber from Morganton who was 65 years old at the time, paid $3,048.50 to Profile Aviation for the use of the aircraft, according to the campaign. This was the only campaign contribution Fleming had given to a political committee for at least 20 years, state elections records show.

This donation caught the attention of elections board investigators. Sheryll Harris interviewed Fleming in August, and he told her he could produce a canceled check proving that he paid for the flight, but it has not yet been produced.

If Fleming had written a check to the Perdue campaign, his donation would not be an in-kind contribution. For Perdue campaign records to be accurate, Fleming would have had to pay Profile Aviation for the flight, not the campaign.

When asked who suggested he pay for the flight, Fleming said, “Well she [Perdue] was up here one Wednesday campaigning. She was in Morganton.” He would not provide any more details.

Strach’s report indicates that Fleming was involved in the transaction through Robert Caldwell, chairman of the Board of Trustees of Western Piedmont Community College in Morganton. The report says Fleming believed he wrote a check from his business account, and that he had been asked by Caldwell to make a contribution. Fleming said he gave his check to Caldwell.

When interviewed by Harris, Caldwell said he asked Fleming to make a contribution, but it was not to pay for air travel. He said he didn’t know the amount of Fleming’s contribution, didn’t handle Fleming’s check, and assumed Fleming mailed it to the Perdue committee.

The Perdue campaign also reported that Ola Caldwell, Robert Caldwell’s wife, made an in-kind contribution in the amount of $1,194.50 for travel on Dec. 8. A spreadsheet released by the Perdue campaign ties the in-kind donations reported from Fleming and Caldwell to the same flight. Although it is not stated specifically, the payment reported from Caldwell may be a separate payment to cover the costs of hiring a pilot and co-pilot for the day.

Tate Johnson, the Perdue campaign staff member who signed Fleming’s name to an in-kind donation form, is now director of Perdue’s Eastern Governor’s Office in New Bern. He told CJ he didn’t remember any interaction with Fleming and didn’t know who actually paid for the flight. Johnson, currently a candidate for the Lenoir County Board of Commissioners, said he might have gotten the information for the form from Fulenwider.

During a phone interview, Fulenwider confirmed he had arranged the flight, but, since he had already given the maximum contribution to the Perdue campaign, he couldn’t donate any more. He said he asked a friend [Caldwell] to find someone to pay for the flight. Fulenwider denied paying for the flight in someone else’s name.

“It was billed to me, but I couldn’t pay for the thing because I was over $4,000. I had to find someone else to pay for it, or they would have to pay for it out of campaign funds,” he said.

Ola Caldwell told CJ she paid something toward the flight, but couldn’t explain the details. “You need to talk with my husband,” she said. When Robert Caldwell was first reached by phone, he said, “I want you all to quit calling me,” and then hung up.

The Department of Commerce charged different rates for the state King Air, depending on its use. For official business, the lieutenant governor’s office would pay $560 per hour, a rate that included fuel and pilots. The plane also could have been used for political purposes at a rate of $825 per hour, but Perdue’s campaign committee would have been responsible for the bill.

On Oct. 3-5, 2008, Easley used the plane to travel to the Vance-Aycock dinner, a Democratic Party political event in Asheville. His campaign paid for the travel at the rate of $825 per hour.

The round-trip flight time from RDU to Manteo is approximately 1.8 hours, placing the cost of that trip at $1,485 rather than the $4,243 Perdue’s flight cost.

On Nov. 15, 2006, Fulenwider or his company paid $1,993 for a flight allowing Perdue to travel from Chapel Hill to Asheville, but records indicated the plane started and ended its trip in Hickory. That flight was one of the 42 flights the Perdue campaign didn’t disclose to the elections board until this year. The campaign didn’t reimburse Fulenwider for that flight until January 2010.

Documents from the Perdue campaign show that Fulenwider also was associated with another convoluted flight Oct. 11, 2007. That flight, which listed Fulenwider Enterprises as the aircraft provider, was also in a chartered Beechcraft King Air. It originated in Hickory and then traveled to Chapel Hill, Concord, New Bern, and back to Hickory.
On Nov. 19, 2007, 39 days after the flight occurred, the Perdue campaign recorded it as a $3,542 in-kind contribution from Robert Noyes III of Morganton, who was an employee of Fulenwider Enterprises at the time. Like Fleming the barber, this was the only political contribution public records show Noyes had made.

A footnote in the June 25 elections board report stated that Greensboro businessman Reichard and New Bern attorney Stubbs assembled Perdue’s team of aircraft providers. Reichard served as finance director for the Perdue campaign and also was finance director for Easley’s 2000 campaign for governor. Stubbs, a seasoned political donor who has reported 255 campaign contributions over the past two decades, was a law partner with Perdue’s now deceased former husband.

“According to [Gardner] Payne, Governor Perdue advised him in 2006 that Peter Reichard was working with Buzzy Stubbs to obtain aircraft providers for the Perdue Committee flights,” the footnote said. Gardner Payne, a Raleigh attorney, was a fundraising volunteer for the Perdue campaign.

That report also stated that Reichard advised Stubbs on how to account for nearly $30,000 in flights that Stubbs paid for through his law firm prior to November 2008.

Perdue later appointed Reichard to the state Economic Development Board. At a recent board meeting, CJ asked Reichard who was in charge of arranging flights for Perdue. “Everybody and nobody was in charge,” he said.

Reichard said he thought Perdue was not allowed to use state aircraft for campaign functions. He said he thought all the flights now have been properly reported. “We went through an exhaustive process,” he said. Reichard acknowledged he knew Fulenwider, but had no information about the flight involving Fleming.

CJ has identified 30 individuals involved in illegal flights, suspicious payment arrangements like Fleming’s, or significantly delayed payments to the Perdue or Easley campaigns.

Federal Aviation Administration officials also told CJ that some flight providers might have been out of compliance with FAA rules for operating an air charter service without certification.

Companies or individuals running air charter services are subject to stricter guidelines than those operating airplanes not for hire. Charter services are required to obtain an Air Carrier Certificate from the FAA. Records show that since 2003, Marvin Shearin of Rocky Mount provided flights to Perdue at least seven times. He told CJ that he did not have an air carrier certificate.

Raleigh attorney Terrance McEnally provided at least five flights to Perdue. When CJ asked if he had an air carrier certificate, he refused to answer and said, “I don’t want to be involved in this.” Responding to the reporter’s comment that he was already involved, he said, “Watch me become uninvolved,” and hung up the phone.

McQueen Campbell, who admitted to providing numerous free flights to the Easley campaign, also provided four flights to the Perdue campaign in 2008 through his companies Raleigh Helicopter and Raleighwood Aviation. Records show he was paid for those flights. A spokesman for the FAA told CJ that neither of Campbell’s companies had an air carrier certificate for the aircraft he used to fly Perdue.