Forest’s case against Cooper might get boost from unlikely source

If North Carolina’s Republican lieutenant governor wins his legal battle with the Democratic governor, a leading voice within the state’s political Left might deserve a bit of credit.

The Forest v. Cooper case is scheduled to head to a Superior Court hearing today. Lt. Gov. Dan Forest is challenging the process Gov. Roy Cooper used in issuing a series of executive orders linked to the COVID-19 pandemic.

Forest’s legal argument relies in part on a piece of recent legislative history. A key player in that history? Rick Glazier. 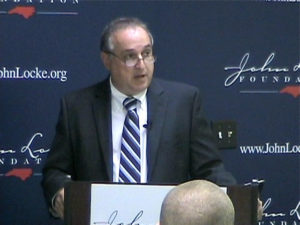 Now the executive director of the N.C. Justice Center, a vocal advocate of left-of-center public policies, Glazier was a first-term Democratic legislator representing Cumberland County in 2004. It’s in that role that Glazier makes an appearance in Forest’s latest legal brief.

Most discussion of Forest v. Cooper has focused on the lieutenant governor’s claim that Cooper should have submitted COVID-19 economic shutdown orders to a vote of the 10-member Council of State. That group includes Forest and the other statewide elected executive branch officials. Forest contends that Cooper’s decision to bypass the council violates the state Emergency Management Act.

A second, less-publicized piece of Forest’s lawsuit deals with Cooper’s alleged violation of another law. That law governs quarantines and isolation in North Carolina.

Treating Cooper’s mandatory stay-at-home orders as equivalent to a quarantine, the lieutenant governor argues that the governor needed court approval of his plans. State law allows quarantines to last no more than 30 days without a court-sanctioned extension, Forest argues.

Looking into the history of state quarantine law, Forest focuses on a legislative debate from 2004.

Two years earlier, lawmakers had written a law that allowed quarantines to last up to 10 days without an order from a Superior Court judge. The earlier law provided no requirement that people subject to quarantine would get official notification of their right to challenge the order immediately in court.

“The legislative history in 2004 is very important to this case,” according to Forest’s legal brief. “It appears that the Department of Health and Human Services was worried that it would spend too much time in court if there was an outbreak of SARS in North Carolina. Thus, they requested that the General Assembly modify the time limits of quarantine and isolation orders that did not require judicial pre-approval to 30 days, rather than the current 10 days.”

Forest quotes minutes from a 2004 debate of the N.C. House Health Committee. “Rep. Glazier explains that while the original bill would have established the Commission on Childhood Obesity, the proposed committee substitute changes the bill to the public health laws relating to quarantine and isolation authority and the confidentially [sic] of medical records and other information.”

Two items are noteworthy here. First, the quotation reminds us that the “gut-and-amend” process in legislative committees predates Republican control of the General Assembly. Glazier and the Democrats who ran the House in 2004 raised no objections about transforming an innocuous Senate bill about childhood obesity into a weightier measure addressing quarantine orders.

Second, Glazier’s lead role in the debate demonstrates his active involvement in the legislation. He was no bystander as state lawmakers debated the courts’ proper role in overseeing executive branch orders involving quarantines.

Returning to the committee minutes, we learn that a 10-day limit on quarantines appeared impractical to government agents. “State and local officials are concerned that, in a SARS-like emergency, current law will force them to spend countless hours in court when their resources will be greatly needed elsewhere to contain the disease.”

Glazier’s bill addressed government concerns. “It extends the authority of the state and local health director for quarantine and isolation from 10 days to 30 days, while preserving the individual’s right to be heard in Superior Court within 72 hours,” according to the minutes.

Did then-Gov. Mike Easley or his health officials complain about new restrictions of their authority? No. “Rep. Glazier advises that Public Health and the Department of Health and Human Services worked on this bill and it has their support.”

Nor did legislators of either party object to the changes. The full House approved the measure, 112-0, and the Senate accepted the House’s proposal with a 47-0 vote one week later.

Forest’s legal brief notes “it was assumed by all” considering the 2004 bill “that a communicable disease would be combatted by isolating those with the disease and quarantining those who may have been exposed to it.”

That didn’t mean government officials would face no limitations on their authority. “[T]he legislature understood that this was a serious deprivation of liberty, and made sure that no one person could make that decision, allowing for judicial review if requested immediately, and judicial pre-approval before lengthy quarantine and isolation orders were entered.”

It would be easy to argue today that COVID-19 represents a new kind of threat. Forest anticipates that argument.

In other words, the 2004 legislative debate focused on the exact type of public health emergency North Carolina faces today.

Lawmakers at the time amended state law “to provide the balance between the need to prevent the spread of a contagious disease and the liberty of the people while providing the due process required to make a quarantine and isolation order equitable,” Forest argues.

Cooper has followed a different path in responding to COVID-19.

“Governor Cooper’s actions and his arguments disregard even the slightest scintilla of balance,” according to Forest’s brief. “Instead he rests on these scales of equity the heavy hand of a Governor who claims to have unlimited authority over the freedom of movement of 10.5 million North Carolinians — totally disregarding even the slightest check on his perceived unlimited power by the Superior Court or the Council of State.”

It’s unclear whether Superior Court Judge James Gale will accept Forest’s arguments, or whether a ruling favoring Forest would survive an almost-certain appeal to the N.C. Supreme Court.

But if the judicial branch agrees that Cooper overstepped his bounds, it’s possible that the decision will rely on work done by Glazier and a legislature led by Democrats 16 years ago.

The Right AOC on Point: The political Left recognizes the importance of N.C. Supreme Court races