Is identity politics a distraction?

If I were part of the ruling elite and wanted to keep people divided and misdirecting their anger at each other instead of me, I could think of nothing better than to convince people to focus obsessively on race.

Looking at it through this lens, it may well be that the race-centered “woke” movement is a cover, a smokescreen, prompting us to direct mistrust, anger, and blame against each other rather than the ruling elite mainly responsible for inequities and injustices the woke mob claims to care about.

What better way to insulate society’s true power centers from criticism by the masses than to divide the masses themselves, pitting them against each other based on how they look?

Remember the “99 percenters” of Occupy Wall Street fame (or infamy)?

While their “solutions” were decidedly socialist, their instincts were strong. Their outrage stemmed largely from the massive bank bailouts orchestrated in 2008, which saw billions of dollars go to help “save” major banking and insurance corporations. Their rallying cry was to unite the “99 percent” of us who were continuing to struggle under the most significant economic crisis since the Great Depression, while the big banks received a decidedly soft landing courtesy of their big government brethren.

The 99 percenters were getting uncomfortably close to uniting people against the true ruling elite: big government in cahoots with big banks, the Federal Reserve, and big corporations. The movement also provided a uniting rallying cry of working- and middle-class households of all races and demographics, directing their angst against the nation’s most influential centers of power.

What to do for the ruling elite?

This 2020 Tablet Mag article documents the media’s dramatic and undeniable shifting of the narrative. 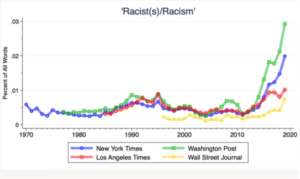 The trends are undeniable. Shortly after the 2011 rise of the 99 percenter movement, major corporate media outlets in near unison drastically increased articles discussing “racism” and “systemic racism.” One would think this dramatic transition rather odd to occur in the second and third year of the administration of the first black president in America.

Perhaps this was just a coincidence, but the results have been unmistakable — and dangerous.

The woke crowd is conditioning people to accept the absurd notion that a white plumber has more in common with a white billionaire CEO than his black or Hispanic construction worker neighbor, simply because of the way he looks — or that the black construction worker has more in common with Maxine Waters than his white plumber neighbor for the same reason.

Divided people are far easier for the elites to control. 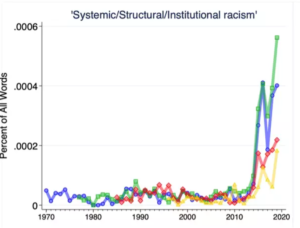 The woke crowd has convinced people that “systemic racism” is to blame for inequalities in wealth, which provides a great smokescreen for true culprits like the Federal Reserve and the welfare state.

In North Carolina, we see major players dutifully carrying out the wishes – wittingly or not – of the ruling elite by stoking racial tensions. The NC Justice Center, the state’s most influential left-wing think tank, has gone fully woke. Racial grievance tinges virtually everything they write, from health care policy to the tax code.

Big government and big business in bed together, while small businesses die. The power centers grow while the little guy shrinks. Meanwhile, the woke mob insists we instead obsess over skin tone.

Lastly, how could this end well? Critical race theory is expanding its reach into more and more schools (and not just government schools), utilizing resentment and shame as its most blunt instruments. Children who look one way are conditioned to resent others who look different. At the same time, another group is taught to be ashamed of themselves for how they look.

Moreover, some children are instilled with hopelessness, taught that the whole “system” is designed to suppress their success and happiness. Why try if the whole system is against you? And what’s the point if those of a different skin color who are successful only became so due to “privilege”?

Imagine high school and college kids currently being indoctrinated with this race-based resentment and shame 20 or 30 years from now. What will race relations look like then? Where is all this headed?

Don’t let the nation’s ruling elite continue to divide us, to throw us off the scent of them continuing to enrich themselves at our expense. Then we’ll truly be awakened.

Will there be a second coming of Donald Trump?

Getting North Carolina back to work

Birds, cows in crosshairs of those hoping to alter history, ‘fix’ our culture