Last week, the N.C. Department of Public Instruction released the state’s annual teacher turnover report. The overall turnover rate for the 2014-15 school year was 14.8 percent, a 0.7 percentage point increase from a year prior. While the actual rate of teacher turnover is an important metric for policymakers, it is hardly cause for alarm.

Lt. Gov. Dan Forest recently pointed out that only 6.8 percent of teachers voluntarily left the profession last year, which is much lower than some estimated national averages. The other 8 percent moved to other positions in education, retired with full benefits, or did not have their contracts renewed.

In other words, only a fraction of those counted as “turnover” actually make a conscious choice to leave the teaching profession or teach in another state.

With apologies to the great Neil Diamond — They’re coming to Carolina.

Between 2010 and 2014, 8,500 out-of-state teachers received North Carolina teaching licenses (via interstate reciprocity agreements) and were employed as classroom teachers the following school year. During the same period, around 2,200 teachers abandoned North Carolina to teach in other states. It is not known how many teachers eventually made their way back to the state, but the phenomenon is not unheard of.

As one would expect, the release of the teacher turnover report generated extensive media coverage, a great deal of discussion on social media, and a fair share of political theater. Ain’t no surprise that public school advocacy organizations and their allies have claimed that the slight increase in the overall teacher turnover rate, coupled with the suspect WalletHub ranking of the best and worst states for teachers, prove that North Carolina is no longer a desirable destination for teachers. They say that Republican education policies have sullied our state’s reputation in the eyes of the nation’s educators. The data say otherwise. 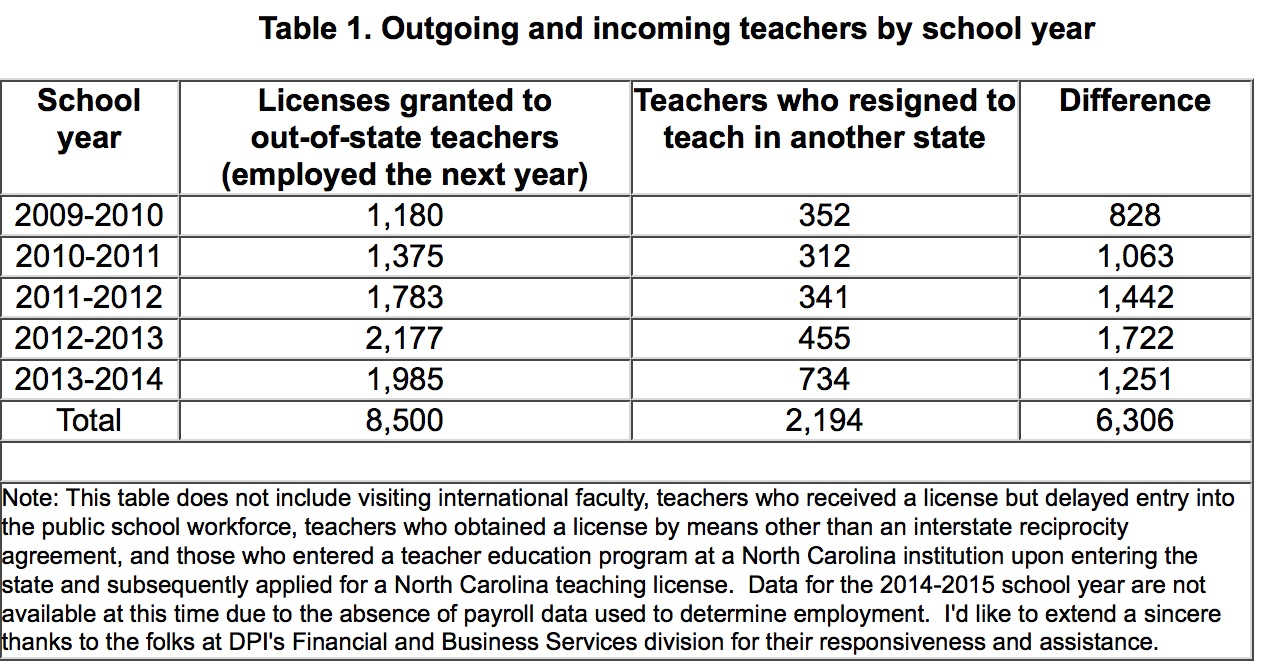 Obviously, state turnover statistics cannot capture the specific reasons why teachers decide to leave or relocate to North Carolina. We are free to live the way we choose. No two teachers will base their career decisions on identical criteria because no two teachers have the same values, preferences, and goals. If they did, teacher recruitment and retention would be a cinch.

Instead, lawmakers have the formidable task of creating and maintaining conditions that make teaching and living in North Carolina as broadly appealing as possible. Or as a wise man in a sequin shirt once explained, “money talks, but it don’t sing and dance, and it don’t walk.”

That is why I’m a believer that the N.C. General Assembly should initiate a multiyear effort to award targeted pay increases to teachers, as well as continue to lower tax burdens for all North Carolinians.

Dr. Terry Stoops (@TerryStoops) is Director of Research and Education Studies at the John Locke Foundation.

Parents’ customized use of N.C. education accounts could protect program