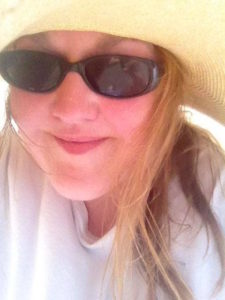 She popped out of a newer-model Camaro — I can’t remember the color — dressed all in black. She wore a long skirt and a T-shirt with a lone white-on-black image and letters that read, simply, “Cash.” Johnny Cash.

Her blonde bangs were damp with sweat, but she seemed unfazed by the heat, which was seemingly absorbed by the dank and aging concrete buildings that surrounded us.

Powell, as I wrote, was downright enthusiastic.

“They showed us this, and we fell in love. We thought it was perfect.”

The former Cabarrus County Correctional Center closed in 2011 and lay dormant until just a few years ago, when Powell and her partners thought it a good place to house a distillery. We toured the decaying buildings, kicking shells left by bullets used by Fort Bragg soldiers training to become part of the elite Special Forces. We walked through overgrown grass and weeds that rose well past our ankles. We gazed at the austere and crumbling guard towers.

Yet Powell never stopped smiling, pointing here and there. We’ll distill here, she said. We’ll store barrels over there. The scene is temporary, she said, a blank canvas for what will be an extraordinary work of art. She planned to open Whiskey Prison by fall.

I smiled, nodded, and applauded the effort.

Honestly, at the time, I thought she was just plain loopy.

Was I ever wrong.

Thing is, I really didn’t know Leanne Powell. But, like many people she met, we soon became friends. From then on, I believed everything she told me.

A couple of weeks ago she sent me the latest release of the distillery’s Conviction bourbon, of which Powell was most proud. This one was special, the first offering of Conviction straight bourbon whiskey, which means it was aged for at least two years.

She messaged me right away, anxious to hear my thoughts and excited about Senate Bill 290, the ABC Regulatory Reform Bill.

Great news on House passage! Hope you are having a good week. I’m dying to know what you think of Conviction straight….please ease my suffering when you taste it one way or another. (She added a smiley face).

I love it, I told her. I went on to say I was watching a concert and that, after the legislature wrapped up, I would blog about her latest whiskey.

OMG. I’m so glad you like it and I’m so sorry to interrupt your evening out! Have fun!!! Thank you for trying it.

Interrupt me anytime, I wrote her back. It was the last time I “talked” with her.

Leanne Powell, at 51, died July 20, after suffering a stroke a week before. Her husband, Drew Arrowood, shared the sad news on Facebook.

Before she became a distiller, Powell worked as chief of staff for U.S. Rep. Larry Kissell and, leaning on that experience, was a leader in reforming the way North Carolina governs alcohol. Powell, also a master marketer, and a brilliant creator and innovator, told me she began in politics as an intern in 1984 and by 1988 had a full-time job among lawmakers.

Whiskey Prison wouldn’t exist without her.

Before Powell had the stroke, Gov. Roy Cooper had scheduled a fundraiser at the distillery. During the visit, last Thursday, Cooper honored her with The Order of the Long Leaf Pine.

“If anyone deserves to be part of the highest honorary society in the state of North Carolina, it’s Leanne Powell,” Cooper said.

Powell, as I was writing “Still & Barrel,” says she often daydreams about taking a telescope to a watch tower at the prison and just staring at the stars.

Well, she doesn’t have to climb a tower anymore. The stars are now much closer, because she is among them, sipping from a glass of her Conviction bourbon. Slainte, my friend.

A memorial service is planned 11 a.m. Saturday, July 27, at Whiskey Prison. In lieu of flowers, people are asked to consider a gift of a plant, which can be replanted at the prison. Organizers are asking that those planning to attend email [email protected]