The best vaccine against tyranny

Unrest. Distrust. Despair. These words characterize just a few of the many struggles the past 12 months have delivered. Thomas Paine’s words could’ve easily been written today and rung just as true: “These are the times that try men’s souls.”

Last week, on April 12, we honored the 245th anniversary of the signing of the Halifax Resolves. The Halifax Resolves is a seminal document, signed by North Carolina colonists, declaring the necessity of independence from the Crown. It laid the groundwork for the Declaration of Independence, which was to be signed three months later. Eighteenth century North Carolinians resolutely took the first courageous stand against the tyranny of King George III.

Our state’s motto–esse quam videri–“to be rather than to seem” was on full display that day 245 years ago, as North Carolinians determined to fight the “usurpations and violence” exacted by King George and Parliament. 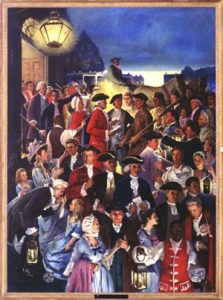 I mention the Resolves (depicted in this mural to the left) not only because of their anniversary, but also because their contribution to our state and nation offer us a lesson in one of the most effective buttresses against tyranny: hope.

What possesses an entire colony and nation, undoubtedly the underdog in this historic fight, to pledge their lives, fortunes, and sacred honors–the highest stakes imaginable–for a chance at freedom from political and economic oppression?

Hope requires fortitude. It demands courage. It necessitates a vision that extends beyond the difficulties of the present. Hope held throughout trials, including a hellish war that saw thousands of lives and livelihoods lost, can only survive with a ferociously dogged resolve that there is something worth fighting for on the other side of the present pain.

Two hundred forty-five years ago, brave North Carolinians exhibited such hope, believing the future had a fighting chance of being brighter than their present. The Halifax Resolves was the product of their closely held conviction. It was their declaration that what lie ahead–liberty–was greater than the tyranny they were leaving behind.

We’ve lived through a difficult year. For some who are reading this, unspeakably so. Yet, the glimpses we’ve had of “normalcy” should serve as a reminder that this year is not without redemption. It doesn’t mean that the learning loss, economic pain, and worst of all, untimely death of loved ones, will be forgotten. We will undoubtedly experience the after-effects of this year for a long time.

But just like the men who staked everything on a free and liberated North Carolina nearly two and a half centuries ago, we, too, have a choice as to what we will do with the hand we were dealt, whether we’re dealing with the tyranny of a virus or an overreaching government. I hope you choose hope. And out of that hope, action.

Republicans in N.C. House, Dems in Congress weigh in on vaccine mandates

Supporters of vaccine passports, which can be faked and forged, are dividing us even more