The July 4 holiday has always provided Americans a welcomed pause for rest, reflection, celebration, and renewal. Never more so than in 2018.

Less than two years ago, we endured one of the bitterest, most divisive elections in our history. Partisan rancor has now reached an unparalleled level and shows no sign of diminishing. Public trust has understandably all but disappeared.

Especially in a time when our collective historical memory seems to be failing, there is much succor and encouragement to be had from remembering our history.  A deeper appreciation of our past can provide confidence in who we are as Americans and hope for what we may yet achieve in the future.

As Americans reflect back over this holiday, we tend most often to remember the founders and the earliest history of the republic, but there are many other chapters in our long history that can also uplift our spirits. One such seldom remembered chapter, involving two long forgotten men, is the presidential election of 1924.

Most historians dismiss the election of 1924 as insignificant in the sweep of American history; however, there is a revisionist view. It was the last election in which both parties nominated a conservative candidate. It was the results of this election that realigned the modern Republican and Democratic parties, sending them onto the courses they have generally adhered to ever since. But there was more to it than this.

The two candidates, Calvin Coolidge and John W. Davis, are also too often dismissed as dull and insignificant. Americans would do well to take another look.

Both men were from small town America – Coolidge from Vermont and Davis from West Virginia. They were both gentlemen in the sense that Confucius used that word – solid citizens of real ability, lack of pretense, personal integrity, and unerring civility. As columnist Fred Barnes has written, “They were neither mean-spirited nor power hungry. I can’t recall a presidential race in modern times between two such honorable men.”

Coolidge was – in Paul Johnson’s words — “the most internally consistent and single-minded of American presidents.” He was a successful and able politician who, despite his sobriquet “Silent Cal,” has left an articulate record of his conservative creed, which he liked to call “common sense.” He was repeatedly elected to office by the people of Massachusetts, finally serving as governor. In 1920, he was elected vice president under President Harding and stepped into the presidency upon Harding’s death in 1923. With the gradual revelation of Harding administration scandals, it was a tribute to Coolidge’s integrity that no hint of scandal touched him. Indeed, he came to stand as an icon for those solid American values of honesty, hard work, self-reliance, thrift, and civility. In an age of sound bites, political spin, image handlers and the like, it is refreshing to rediscover a leader who was in every sense himself. Calvin Coolidge was the real thing. Like him or not, you knew what he was. 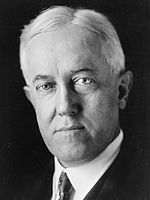 The Democratic nominee in 1924, John W. Davis, was a man of unimpeachable integrity, immense personal charm, and extraordinary legal ability. He emerged from the House of Representatives to serve under President Woodrow Wilson with distinction as solicitor general and as ambassador to Great Britain. He headed a major Wall Street firm, served as counsel to many major corporations, was president of the American Bar Association, and was widely known as “the lawyers’ lawyer.” By the end of his long career, Davis had argued more cases before the Supreme Court — 142 — than anyone in American history except Daniel Webster. Although it may be difficult for modern Americans to imagine, there appears never to have been even a trace of self-promotion in Davis. He was always put forward for office by friends who knew him well. As Walter Lippmann observed of Davis, “I have seen a good many men under the awful temptation of the presidency. I have never seen another who had such absolute respect.”

Interestingly, there was even a direct link between each of these men and the 4th of July. Coolidge was born on July 4, 1872, Independence Day. Davis was born on April 13, 1873, Thomas Jefferson’s birthday. Both men became ardent champions of the Jeffersonian principles of limited government and individual freedom, which we celebrate July 4.

On this Independence Day, if Americans will reflect back on Coolidge, Davis, and the 1924 election, perhaps we just might conclude that graciousness and civility are not outdated political attributes. Strong conviction does not preclude these attributes; likewise, civility and graciousness do not demand philosophical ambivalence. Despite all the unattractiveness of modern politics, perhaps Lord Tweedsmuir’s assessment can still somehow hold: “Public life is regarded as the crown of a career. … Politics is still the greatest and most honorable adventure.”