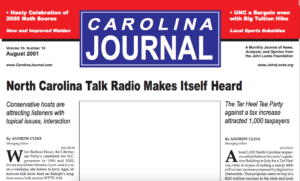 • Why does conservative talk radio con-tinue to thrive, especially in North Caro-lina? The answer is part Rush inspiration; and part public participation. One example of conservative chat’s influence resulted in the recent Taxpayer Tea Party at the legis-lature, which was led by WPTF’s Jerry Agar. Page 1

• Almost anywhere you go in North Caro-lina, you are likely to find a local conserva-tive radio talk show on the air. Page 4
• The state auditor’s review of the Aviation Division of the Department of Transporta-tion revealed several irregularities in a grant for airport improvements. Page 5
• The Department of Public Instruction raved about the state’s performance on na-tional math tests, but close analysis should temper their enthusiasm. Page 5

• Will higher education, offered on the Internet, be eventually attainable for free? Page 10
• A study found that UNC tuition, despite increases, was still a bargain compared to other state universities. Page 11
• George Leef says that by looking at how other states cut their university budgets, North Carolina might learn something. Page 11
• UNC-Chapel Hill offered a summer in-doctrination course on “diversity.” Page 12
• Some colleges are requiring students to have personal digital assistants. Page 12
• A U.S. Supreme Court ruling could have a major impact on Title IX implementation on college campuses. Page 13
• Another U.S. Supreme Court ruling hurts the cause of race-based preferences in cam-pus admissions. Page 13

• Reviews of Making Patriots by Walter Berns and The Revolutionary Writings of John Adams by C. Bradley Thompson. Page 18
• Reviews of Coming Out of the Woods by Wallace Kaufman and Antitrust after Microsoft by David Kopel. Page 19

• A report on the terrorist tactics practiced at the Taxpayer Tea Party. Page 24