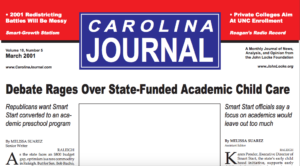 • Superior Court Judge Howard Manning last fall ruled that North Carolina was required to fund a pre-school program for “at-risk” children. Some lawmakers want to transform Smart Start into that program. But Smart Start officials say that would do children a major disservice. Page 1

• Judge Manning also is considering a case that could force the state to equalize public school spending statewide. But school spending already is equal. Page 3
• Redistricting battles across the country are likely to be messy this year but also less tilted towards Democratic gains. Page 4
• A member of the N.C. Aeronautics Council did airport work funded by a grant he voted to approve. Now he wants to get paid. Page 5

• Definitions of Smart Growth vary widely, even supporters are split. Page 14
• Growth can pay for itself, several studies have found. Page 15
• Tom Fetzer says opponents of a Raleigh development are just NIMBYs. Page 15
• One on one with Thomas Stith of the Durham City Council. Page 16
• Revenue problems and new expenditures dominate city agendas. Page 17

• Reviews of The Tyranny of Good Intentions by Paul Craig Roberts and Lawrence M. Stratton and Bobos in Paradise by David Brooks. Page 18
• Reviews of Property and Freedom by historian Richard Pipes and A History of Britain by historian Simon Schama. Page 19

• John Hood announces his conversion to the cause of regulating those “precious polity fluids.” Page 24