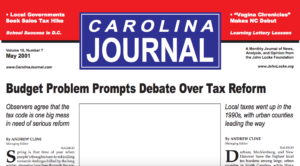 • The state’s budget woes have prompted serious attempts to reform the tax code. Lawmakers and policy experts have busied themselves this spring with trying to figure out how the tax code got to be such a complex mess and how the state can make it more fair and efficient. Page 1

• Editorials address Gov. Mike Easley’s patronage problem and the state’s cap on charter schools. Page 20
• Editorials on the N.C. Microelectronics Center and the Charlotte Hornets, and John Hood explains the best methods of investing in human capital. Page 21
• Don Carrington argues that most state boards are unneeded and should be abolished. Page 22
• Michael Walden explains how the federal tax code affects married couples and what can be done to eliminate the marriage tax penalty. Page 23
• Erik Root says the state should strengthen, not weaken, marriage laws. Page 23

• John Hood uncovers forgotten memos from a small, N.C. town revealing that government officials will use any excuse to justify tax increases. Page 24