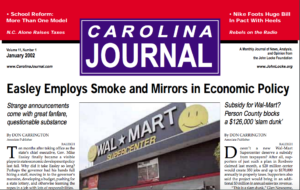 • Were a string of economic development announcements,accompanied by great fan fare, by Gov. Mike Easley a true testament of his ability to lure business to North Carolina? Carolina Journal’s Don Carrington digs beneath the surface to find out. Page 1

• Whole-school reform models have become a common answer for educators searching for methods to boost academic achievement. Page 6
• Vocational education is experiencing a resurgence in America’s schools. Page 7
• Sherri Joyner says that despite opposition, charter schools should be expanded in North Carolina. Page 7
• A report by the Manhattan Institute for Public Policy found that education freedom boosts student achievement. Page 8

• An agreement between UNC-Chapel Hill and the Nike Corporation raised anew fears of the corruption of the university. Page 10
• After winning $600 million in bond money from voters in 2000, will community colleges soon be asking for more? Page 11
• George Leef writes that in higher education, we’re well past the point of diminishing returns. Page 11
• Despite hefty tuition increases this year, the UNC system’s costs are still lower than the national average. Page 12
• Racial preferences are over for now in Georgia, but the battle rages on in Michigan. Page 12
• Pressure intensifies for a UNC-Wilmington professor over his response to a student’s antiwar e-mail message. Page 13

• Although annexation and property rights were chiefly responsible for turnover in Wilmington elections, corruption also played a part. Page 14
• Science fiction author Orson Scott Card, a resident of Greensboro, says we just had another pathetic “local” election that will make no difference in our lives. Page 15
• New Raleigh Mayor Charles Meeker ran partially on a platform of light rail going to North Raleigh, but did that idea disappear, and did he keep it from voters?Page 15
• An interview with Johnston County Commissioner Allen Mims. Page 16
• Davidson County Sheriff Gerald Hege decapitates Osama bin Laden in his Christmas dreams and greetings. Page 17

• A review of the book Stealing Secrets, Tell-ing Lies by James Gannon. Page 18
• A review of Rebels on the Air-An Alterna-tive History of Radio in America by Jesse Walker, and The Great American Tax Dodge by Donald L. Bartlett and James B. Steele. Page 19

• The “GWINCH” (see the article), and an “ARSE,” conducted an evaluation of the Teapot Preschool in Wilmington. Carolina Journal has obtained a copy of the disciplinary report. Page 24