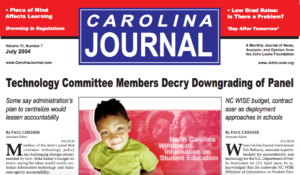 • Onerous urban planning is driving former Portland, Ore. residents across the Columbia River into Vancouver, Wash., according to a community development director who warns that the story of those two states and two cities should serve as a caution to other urban centers. Page 4
• A national taxpayer advocacy organization, the Washington-based Americans for Prosperity Foundation, opened its third state chapter May 18 in North Carolina. Page 4
• A recent beneficiary of tax rebates through North Carolina’s Job Development Investment Program received the incentives despite its apparent lack of qualifications for the grants. Page 5

• Whether visual, auditory, or kinesthetic, it makes a difference, experts say, in how students absorb, retrieve, and communicate information throughout life. Page 6
• Many North Carolina public schools, and some private schools, have participated for years in civics education through a national organization called Kids Voting, and some new institutions are coming onboard. Page 7
• For a town that tends to roll up its sidewalks from Friday evening until Monday morning, the North Carolinians for Home Education conference was a major event for Winston-Salem. Page 8
• Landmark Legal Foundation may be looking for new targets in its campaign to bring federal heat on teachers unions that illegally use member dues to fund political activities. Page 9

• On June 11, the Michigan Court of Appeals ruled unanimously in favor of the petition language for the Michigan Civil Rights Initiative, a ballot initiative that would prevent the state of Michigan from using racial preferences in public university admissions or state employment or contracting. Page 12
• A recent report published by The Education Trust argues that we ought to be deeply concerned over the fact that only about 60 percent of the students who enroll in four-year institutions in the United States earn a bachelor’s degree within six years. Page 12

• The Apartment Association of North Carolina wants the General Assembly to know that consumers and environmentalists will both benefit from proposed rule changes that cover how apartment owners bill their tenants for water. Page 14
• A long-simmering case of congestion in Hillsborough illustrates the complexities of the road-building process in North Carolina. Page 15
• An interview with Washington Times Pentagon correspondent Rowan Scarborough. Page 17

• A review of the film The Day After Tomorrow. Page 18
• Reviews of the books Faulty Towers by Ryan C. Amacher and Roger E. Meiners, and Lawyered to Death by Michael Biehl. Page 19

• An editorial about the “piddling away” of journalists’ credibility. Page 20
• Editorials on local government budget deficits and the state’s transportation policy. Page 21
• Dr. Michael Walden writes that students have it drilled into them that they must go to college to get a good-paying job, so he wonders: Is it time to change the way we pay for college? Page 22
• George Leef writes that it’s a presidential election year, therefore we have to endure the almost incessant pandering to special-interest groups that so dominates our politics. Page 23

• CJ parody: With all the dangers awaiting North Carolina’s citizenry, it gives everyone a warm feeling to know that our state’s elected officials look out for us by using public funds to televise public-service announcements. Page 24