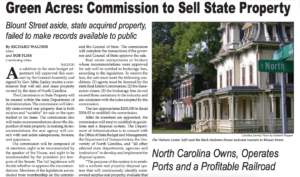 • Before it adjourned its short session, the General Assembly created a commission that will do something that previously happened rarely—the commission will sell and lease surplus state property. The first property to be returned to the private sector is on Raleigh’s historic Blount Street. Page 1

• A new ferry service across the Currituck Sound in northeastern North Carolina was scheduled to begin Aug. 17 even though the boat had not been delivered and an investigation of illegal dredging continues. Page 4
• After a story was published in February about his contract dispute with Basnight Construction, James Morris of Elizabeth City thought it would be easier to collect about $50,000 he was owed, but as of Aug. 20 he still didn’t have his money. Page 4
• A state-funded education and business development center, which recently came under scrutiny because of duplicative programs and classes with nearby Gaston College, apparently will be absorbed by the college next year. Page 5

• Gov. Mike Easley, in an effort to partially comply with a North Carolina judge’s previous rulings to shore up funding for schools in poor counties, in July established a Disadvantaged Students Supplemental Fund and stocked it with $12 million from unreserved cash balances left over from the 2003-04 fiscal year. Page 6
• Modeled after the successful program independently established and operated for some time at nearby Grandfather Home for Children, Crossnore Academy has quickly established its own reputation for accomplishment. Page 7

• Conservative students at the University of North Carolina at Chapel Hill are criticizing the Summer Reading Program again. Page 11
• Shannon Blosser writes that the University of Miami’s, and other schools,’ decisions to admit students with a checkered past suggests the health of athletics departments are more important than the safety of students. Page 11
• A reporter for USA Today, using data from the College Board, the Office of Management and Budget, and the Internal Revenue Service, wrote a front-page article that turned conventional wisdom on college costs on its ear. Page 12
• George Leef says now that we can stop talking about Sen. John Kerry as the “presumptive” Democratic nominee, it is worthwhile to take a look at the proposals he has put forth regarding higher education. Page 13

• As the third anniversary of the Sept. 11 attacks nears, antiterrorism funding for North Carolina has topped $200 million, and since 1999, more than $186 million in federal grants has been received or allocated to the state. Page 14
• Greensboro’s efforts to hold on to a minor league hockey franchise have ended in failure. Page 16

• A review of a National Geographic expose on America’s obesity problem, entitled “Why Are We So Fat?” Page 18
• Reviews of the books You Can’t Say That! by David E. Bernstein, and No Excuses: Closing the Racial Gap in Learning by Abigail and Stephan Thernstrom. Page 19

• An editorial on the vice presidential candidacy of North Carolina Sen. John Edwards. Page 20
• George Leef writes that when universities, like Winston-Salem State, try “the Hail-Mary” when they attempt to use success in athletics as a means of improving their academic reputations and finances, they rarely succeed. Page 22
• Michael Walden, in an open letter to North Carolina candidates, suggests five areas to improve state government. Page 23

• CJ parody: In a drive to attain higher visibility, the North Carolina School of the Arts instituted an athletics program. Page 24