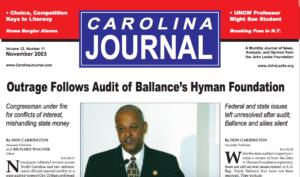 • The John A. Hyman Memorial Youth Foundation, chaired by U.S. Rep. Frank Ballance, failed to account for hundreds of thousands of dollars in state funds, according to an audit released Oct. 22 by the State Auditor’s Office. Page 1

• Last year Lenoir County’s emergency medical services responded to more than 6,000 calls, and a private company could lighten that load significantly — but the county is not receptive to the idea. Page 4
• About 200 people rallied Oct. 1 at the State Capitol in support of public displays of the Ten Commandments and unrestricted acknowledgments of God. Page 5
• The first program audit of The North Carolina Center for Applied Textile Technology recommended Oct. 1 that the General Assembly consider specific guidelines for the Belmont school’s funding and that audits of the center be conducted annually. Page 5

• According to a Mackinac Center study, the interrelated traits that make schools work are choice and financial responsibility for parents, freedom, competition, and a profit motive for schools — a true free market in education. Page 6
• Many states report high school dropout rates instead of graduation rates, which may give an overly rosy picture of what’s really going on. Page 7
• Lindalyn Kakedelis writes that for years the education establishment has promised that more workshops, more teachers, smaller classes, and time will fix the problem of academic achievement disparity between racial-ethnic groups, but it hasn’t worked. Page 7
• Two new surveys document a lack of basic knowledge, along with widespread complacency — if not disinterest — among Americans in community and political affairs. Page 8

• A dispute over what a University of North Carolina at Wilmington professor said at a forum Sept. 23 has led to a lawsuit threatened against the student newspaper and also a student accused of libel. Page 10
• UNC-Chapel Hill officials are once again voicing concerns over faculty retention, saying the “brain drain” is caused by other universities “raiding” UNC-CH faculty with greater salary offers. Page 11
• George Leef says sorry, but color him skeptical about the Carolina Covenant, which would enable kids from families with incomes below 150 percent of the federal poverty level to attend UNC without having to borrow any money. Page 11

• The City of Charlotte found a way to manage its false burglar alarm problem by working with the alarm industry and a private contractor, and by implementing a new ordinance that penalizes businesses and homeowners for false alarms. Page 14
• Cumberland County officials and community leaders are challenging the state’s adults to do a better job instilling teen-agers with the knowledge and skills necessary to become effective participants in public-policy debates and civic activities. Page 15
• An interview with University of North Carolina at Charlotte Professor David Hartgen, who recently authored a study on highways and sprawl in North Carolina. Page 17

• George Leef reviews the book Breaking Free: Public School Lessons and the Imperative of School Choice by Sol Stern. Page 18
• Reviews of the books Living It Up: Our Love Affair with Luxury by James B. Twitchell, and Who’s Teaching Your Children? by Vivian Troen and Katherine C. Boles. Page 19

• Roy Cordato writes that the North Carolina Senate, in a special session, passed some important medical malpractice reforms. Page 22
• Michael Walden debunks the myth that service jobs are somehow less “worthy” than manufacturing jobs, and says any job that provides value to the economy and the consumer is “worthy.” Page 23