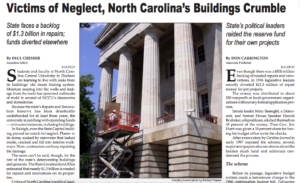 • A total of $1.3 billion is needed for repair and renovation of state buildings and property. Observers say the problem stems from the setting of wrong priorities rather than lack of money. Page 1

• A bill that has passed the state House would turn what was intended to be a temporary state authority into a permanent bureaucracy having expanded responsibilities. Page 4
• While defenders say the state’s political leaders have only followed the national trend in raising taxes to fill budget holes, a new report suggests that North Carolina is almost alone in enacting large-scale tax increases every year since 2001. Page 4
• Taking personal responsibility when tragedy strikes may not be easy or popular, but it is still the most honorable course of action, says the former captain of a submarine that struck and sunk a Japanese fishing boat two years ago. Page 5

• Winston-Salem hosted more than 8,500 North Carolina parents and students in May at the 19th annual North Carolinians for Home Education conference and book fair. Page 6
• According to the National Center for Education Statistics, adults who complete less than a secondary education earn about 67 percent as much pay as working adults who earn a high school diploma. Page 7
• Lindalyn Kakadelis writes that a recent report on public opinions about public education affirms the obvious. Page 7
• Karen Palasek reports that, based on various studies, it appears that small high schools surpass larger ones when it comes to academic achievement. Page 8

• Two ideas under discussion in the state legislature would make it more difficult for legal residents of the state to be admitted to the University of North Carolina. Page 10
• Faculty salaries in the University of North Carolina system compare well with those of their peers, according to a study released in May by a Virginia public-policy think tank. Page 11
• A report from the Cato Institute suggests another method for paying for higher education other than student loans: human capital contracts. Page 12

• A General Assembly bill expected to become law in late June authorizes the Charlotte-Mecklenburg police department to expand its use of cameras to catch speeders. Page 14
• Cities in North Carolina are losing scheduled airline service. Aside from the state of the economy and the aftereffects of Sept. 11, fundamental changes in the airline industry make it unlikely that passenger flights will again grace airfields in several of the state’s cities. Page 15
• Randal O’Toole writes that data from the 2000 Census show that at least 94.6 percent of the United States is rural open space. Page 16
• An interview with former U.S. Navy submarine captain Scott Waddle. Page 17

• Kory Swanson reviews the book The Language Police: How Pressure Groups Restrict What Students Learn by Diane Ravitch. Page 18
• Reviews of the books Creative Destruction: How Globalization Is Changing the World’s Cultures by Tyler Cowen, and How the Dismal Science Got its Name by David Levy. Page 19

• An editorial on the Jayson Blair scandal at the New York Times and the troubling downward spiral of newspaper journalism in general. Page 20
• George Leef writes that grade inflation ought to be a high concern of college administrators, but there is little evidence that they are willing to fight to stop it. Page 20
• Michael Walden writes that in a new report two economists debunk many myths about urban sprawl. Page 22

• Paul Chesser writes that Rhode Island contributes nothing of value to the nation and ought to be absorbed by Connecticut or Massachusetts. Page 24