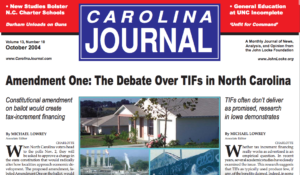 • When North Carolina voters head to the polls on Nov. 2, they will be asked to approve a change in the state Constitution that would radically alter how localities approach economic development. Page 1

• The North Carolina Republican Party in August endorsed Raleigh lawyer Paul Newby for the Supreme Court seat vacated by Justice Robert Orr, and the gesture gave an inkling of how the two major political parties might treat the nonpartisan races this year. Page 4
• The director of the North Carolina Department of Transportation’s Ferry Division and the superintendent of dredge and field maintenance were the focus of a raid on state offices by state and federal law enforcement Aug. 26. Page 4
• Despite scrutiny by The News & Observer of Raleigh in 2002 over his use of state aircraft to travel to his home in Southport, Gov. Mike Easley has increased the frequency of such trips this year. Page 5

• Two reports released in mid-September by the North Carolina Education Alliance provide compelling new findings about the state’s diverse and growing charter school movement. Page 6
• Gaston College Preparatory Academy is a charter school founded on the five pillars of KIPP, the Knowledge is Power Program. Page 7
• Thousands of black children across North Carolina are finding their way out of institutionalized education and into the bosom of hearth and home to learn their ABCs and 123s. Page 8
• Schools are dealing with a new challenge this year as they come up with creative ways to instruct special-needs children. Page 9

• A study released recently by the John William Pope Center for Higher Education Policy shows how the annual ranking of American colleges and universities by the magazine U.S. News and World Report is an unreliable guide to academic excellence. Page 12
• North Carolina taxpayers are supporting, through the University of North Carolina at Chapel Hill, an “independent news” site that regularly features calls for the execution of George W. Bush, promotes armed uprisings in America, and receives dozens of other conspiratorial rants too bizarre to explain. Page 12
• UNC-CH is being sued by a Christian fraternity, Alpha Iota Omega, for officially derecognizing the group because the group wouldn’t sign a “nondiscrimination” pledge. Page 13

• In Durham, District Attorney Jim Hardin applied for and received a U.S. Department of Justice grant to hire a prosecutor specializing in getting gun-toting criminals off the city’s streets. Page 14
• The debate continues in Charlotte over the city’s efforts to ensure that minority- and female-owned businesses receive a “fair” portion of city contracts. Page 16

• A review of the book Unfit for Command: Swift Boat Veterans Speak Out Against John Kerry. Page 18
• Reviews of the books The Morality of Laughter by F. H. Buckley, and The Worm in the Apple: How the Teacher Unions Are Destroying American Education by Peter Brimelow. Page 19

• An editorial on recent convictions and indictments of prominent North Carolina politicians. Page 20
• George Leef writes that demonizing Wal-Mart appeals greatly to high-brow liberal voters who are easily enraged over allegations that its workers are underpaid and that it drives “mom and pop” stores out of business. Page 23

• CJ parody: It’s no secret that North Carolina, lacking such an amorous phrase, has long been jealous of the Old Dominion’s slogan “Virginia Is for Lovers.” Page 24