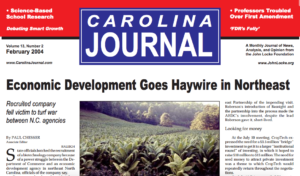 • Negotiations with a now-defunct company in 2001-02 revealed fissures in North Carolina’s economic development structure, which apparently are harming the state’s ability to lure business. Page 1

• CropTech Corp. negotiated a relocation package to come to North Carolina through State Sen. Marc Basnight because company officials “were told there was no one more powerful in the state of North Carolina than Senator Basnight.” Page 3
• The fragmentation of leadership and responsibilities has diminished the effectiveness of North Carolina’s publicly funded economic development agencies, according to a private developer who once had dealings in northeast North Carolina. Page 4
• North Carolina’s Northeast Partnership, created by the state and able to use free legal counsel from the attorney general, keeps its own lawyer, whom it sometimes pays at a rate of $250 per hour. Page 5

• No Child Left Behind requires that school improvement programs be grounded in “scientifically based research,” so the U.S. Department of Education issued a document to clarify what that means. Page 6
• Gov. Mike Easley proclaimed January National Mentoring Month, and he is encouraging support of state-sponsored mentor screening, training, and assignment programs. Page 7
• Lindalyn Kakadelis writes that nowadays proficiency is relative, which leaves parents and citizens confused about the reliability of how well public school students achieve. Page 7
• Education Week’s “Quality Counts” report considers the problems of fairly assessing special education students under the federal No Child Left Behind law. Page 8

• CJ looks at a Duke University course, “Womens Studies 161S: Money, Sex, and Power,” which was included by the Young America’s Foundation in its annual report on silly college courses. Page 12
• Last fall, several universities shut down “affirmative action bake sales,” held by students protesting race-preferential admissions policies. Page 12
• Stephen Balch writes that the last third of the 20th century witnessed the rise and triumph of the postmodern, or better yet, the New Age University, whose core mission was to bring America into a new age based on substantially altered principles and social forms. Page 13

• George Leef reviews the book FDR’s Folly: How Roosevelt and His New Deal Prolonged the Great Depression, by Jim Powell. Page 18
• Reviews of the books The Ideas That Conquered the World: Peace, Democracy, and Free Markets in the Twenty-first Century by Michael Mandelbaum, and Outgunned: Up Against the NRA by Peter Harry Brown and Daniel G. Abel. Page 19

• Michael Lowrey writes that while the recording industry blames all of its problems on people downloading free music, the real problem is that the industry’s economic model is broken. Page 20
• An editorial on proposed federal legislation that would revolutionize how gas taxes are utilized. Page 20
• Editorials on the idea of a new state constitution, and on Fayetteville’s failed Festival of Flight. Page 21

• CJ parody: Having learned that laziness is in reality a neurological disorder, a University of North Carolina at Chapel Hill researcher’s discovery of “output failure” could save a generation from abusive language and work. Page 24