2016 Road To The White House Passes Through N.C. 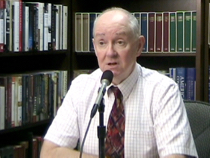 In 2008, then-Sen. Barack Obama won North Carolina’s 15 presidential electoral votes. Mitt Romney took the prize in 2012. With the 2016 presidential election cycle in full swing, about 20 men and women of both major political parties are seeking to snag all 15 on the way to 1600 Pennsylvania Avenue. Carolina Journal Managing Editor Rick Henderson explains why our state is more and more of a battleground and looks at the debate over moving up North Carolina’s primary to early March. Next is a look at economic policy. Even those who see the value in economics sometimes believe that economic considerations should be thrown out the window during emergencies. Peter Boettke, professor of economics at George Mason University, details some of the problems created when policymakers employ what he calls “emergency room economics.” Then we turn to health care for veterans. Problems surrounding Veterans Affairs hospitals have faded from the headlines in recent months, but freshman U.S. Sen. Thom Tillis of North Carolina is still focusing on the issue. He detailed some ongoing VA problems during a recent trip to Durham. That’s followed by a look at years-old legal battle. The state has finally reached a deal with environmental groups that will allow a project to move forward to replace the Bonner Bridge at the Outer Banks. You’ll hear reaction to the deal from Gov. Pat McCrory, state Transportation Secretary Tony Tata, and environmental activist Derb Carter. And finally, we look at North Carolina’s review of the Common Core education standards. John Locke Foundation Director of Research and Education Studies, Terry Stoops, discusses the problems with the standards – particularly the math standard – and offers a path for improvement.