An Easy-To-Understand Primer On The State Budget 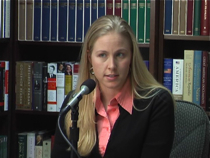 North Carolina lawmakers are diving into many policies and issues while they’re in session, but their chief responsibility this year is to craft a two-year operating budget for state government. The John Locke Foundation’s new Fiscal Policy Analyst, Sarah Curry, gives us a preview of how the budget works, the outlook for revenues, and why the term “the state budget” typically doesn’t encompass all the money the state receives and spends. Then we turn to the change in power in the state’s second-highest office. North Carolina has its first Republican lieutenant governor in two decades. Dan Forest shared his priorities for the state’s second-highest elected executive post during a recent presentation to the John Locke Foundation. Forest’s private-sector background offers a different perspective on the way state government should approach challenges North Carolina will face in the next four years. In a related matter, the GOP has more power in state government now than in living memory. At least one lawmaker is urging his colleagues not to abuse that power. Rep. John Blust, R-Guilford, raised a red flag during a House debate on a bill that leaders had rushed through the chamber with little public notice. That’s followed by a look at ominous impacts of ObamaCare. In addition to its health and economic impacts, the federal law could have major negative impacts on religious liberty. Eric Kniffin, legal counsel at the Becket Fund for Religious Liberty, explains his group’s concerns about the federal health care reform law. And finally, the John Locke Foundation’s John Hood discusses his recommendations for a fundamental retooling of how North Carolina government operates. This includes changes to the executive, judicial, and legislative branches – changes outlined in the new John Locke Foundation book, First in Freedom.