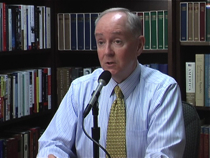 Left-leaning groups have waged a fierce campaign to discredit a group called the American Legislative Exchange Council (ALEC), a free market supporting organization with a membership of state lawmakers across the country. Carolina Journal Managing Editor Rick Henderson analyzes the criticism and points out that progressives fail to apply the same standard to the National Conference of State Legislatures (NCSL), which does work similar to ALEC but from a progressive viewpoint. Then we turn to North Carolina’s rules on car inspections. Does it make sense for North Carolina to force drivers of the newest cars to pay for annual air-quality emissions inspections? A majority of state lawmakers said no this year, approving a measure to exempt cars from the latest three model years from the annual inspections. The exemption also applied to cars with less than 70,000 miles. The idea generated plenty of debate. You’ll hear highlights from the N.C. House’s discussion of the issue. Next are comments from a U.S. senator many consider a possible vice presidential candidate for Republican Mitt Romney. Sen. Marco Rubio of Florida has made his mark as a rising star in the conservative movement. He shared his thoughts about the American Dream, the 2012 election, ObamaCare, and the Tea Party during a recent trip to Raleigh. That’s followed by a look at World War II history. The Nazis stole 22 million works of art during World War II, but a small group of Americans known as “monuments men” helped recover many of those works once Allies started to roll back the Nazi tide. Author Thomas Thibeault tells the story of the monuments men through the historical novel Balto’s Nose. Thibeault shares key themes from his book. And finally, John Locke Foundation Vice President for Research Roy Cordato discusses key themes found in JLF’s Agenda 2012, a document that offers policy prescriptions for a slate of key issues and areas of state and local government. Cordato explains why the perspective is grounded in support of free markets and limited government, which lead to economic growth.