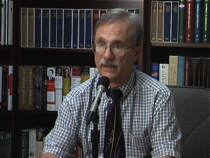 Supporters of state subsidies to help prop up the renewable energy industry have reason to be happy. The legislature failed this year to scale back a mandate that requires utilities to buy a certain percentage of high-cost renewable rather than lower-cost traditional energy. John Locke Foundation Director of Research Roy Cordato discusses comments by Gov. Pat McCrory about the subsidies and offers a critique of the governor’s view. Then we turn to fiscal issues. A $2.5 billion debt to the federal government is just one of the problems that has plagued North Carolina’s unemployment insurance program. The head of the N.C. Division of Employment Security, Dale Folwell, recently discussed the challenges his division faces during a presentation for the John Locke Foundation. You’ll hear highlights. Next is a look at education policy. The late economist Milton Friedman was an early champion of creating school vouchers to improve public education. Terry Stoops, the John Locke Foundation’s director of research and education studies, discusses Friedman’s voucher proposals and their importance today. That’s followed by a fascinating look at astronaut Rich Clifford, who kept a secret from most of his crewmates during his last Space Shuttle mission. Now Clifford is sharing that secret in a forthcoming documentary. Clifford was dealing with the early stages of Parkinson’s Disease when he last worked in outer space. He discusses how the disease affected his work. And finally, Jane Shaw of the Pope Center for Education Policy comments on a change in the law that governs who can be hired to teach at public charter schools. Shaw says the lowering of the percentage of teachers who must be state certified could lead to competition in the training of teachers.