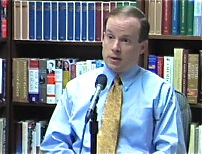 At 10.7 percent, North Carolina currently has one of the highest unemployment rates in the country. Only Michigan, South Carolina and Oregon are in worse shape. John Locke Foundation President John Hood says North Carolina’s economic woes are no accident. He says policies enacted during the Mike Easley years have helped create this scenario. He discusses the misguided policies that have contributed. Then we turn to public schools in our state. The American Legislative Exchange Council ranks North Carolina No. 30 among the 50 states in public school test performance. That ranking recently prompted Senate Minority Leader Phil Berger, R-Rockingham, to recommend a series of education reforms that might help boost the state’s performance. Those reforms target areas such as early childhood education, class-size reduction, and dropout prevention. You’ll hear Berger’s ideas, along with a response from John Locke Foundation education policy analyst Terry Stoops. Next, some members of Congress have talked about reviving the so-called Fairness Doctrine, the former federal rule that required broadcasters to offer equal time for opposing viewpoints. Raleigh media attorney Mark Prak thinks the return of the Fairness Doctrine would be a bad idea. He explained why during a recent presentation to the John Locke Foundation’s Shaftesbury Society. That’s followed by a look at news coverage in our state. Regular newspaper readers are bound to have noticed the shrinking number of original stories appearing in North Carolina’s daily papers in recent years. Michael Lowrey, Carolina Journal associate editor, scours those papers daily as part of his work with Carolina Journal Online. Lowrey says he has found that fewer newspapers are covering issues of statewide significance. He discusses the negative consequences of this change. And finally, in North Carolina, it literally pays for residents to consult the state’s tax code before deciding whether to engage in some activities and stay away from others. The John Locke Foundation’s Vice President for Research, Roy Cordato, says that very fact illustrates that the tax code needs serious reforms. He discusses what should be done, and why.