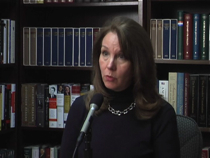 In early May the North Carolina General Assembly will reconvene in Raleigh. But even though what’s ahead is called the “short” legislative session, the group’s “to do” list is quite long. John Locke Foundation Vice President for Outreach Becki Gray discusses key issues likely to be discussed in addition to adjusting the General Fund operating budget. Then we turn to the continued debate over the merits of targeted tax incentives. You’ll hear highlights from a recent committee debate about the impact of incentives on employment and economic growth. Next is a look at a new requirement for photo I.D. There’s been plenty of debate about North Carolina’s plan to require photo identification from voters, but now the N.C. Division of Employment Security is also instituting a photo ID requirement for unemployment benefits. Assistant Commerce Secretary Dale Folwell explained why during a recent meeting with state legislators. That’s followed by a look at energy policy. North Carolina policymakers hope to strike a proper balance when approving laws dealing with energy, the environment, and the economy. Rep. Mike Hager, R-Rutherford, has helped drive much of the recent debate about energy-related issues. He shares his ideas about top priorities for energy-related legislation in 2014 and beyond. And finally, Ardis Watkins, director of legislative affairs for the State Employees Association of North Carolina (SEANC), explains the group’s concerns about investment policy for the state’s retirement/pension fund – a concern so serious that SEANC has hired a forensic investigator to look into how retiree dollars are being invested and the fees attached to the investments. Watkins also discusses SEANC’s disagreement with the state legislature over the move to give the state treasurer more flexibility in investing in what SEANC deems to be risky investments with hedge funds.