N.C. Board of Elections Gears Up For 2016 Election 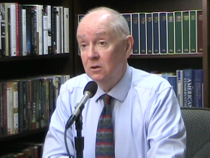 The next year will be an incredibly busy one for the state Board of Elections. Candidate filing season is in full swing, the state primary has been moved up, new election rules are taking effect, and there are changes inside the agency itself. Carolina Journal Managing Editor Rick Henderson delves into the changes, including the resignation of the board chairman and a new public spokesperson. As we head into a new year, the first real votes in the 2016 presidential election are little more than one month away. One of the pundits who will be watching election returns with great interest is Fred Barnes, executive editor of the Weekly Standard and political commentator for Fox News. During a recent visit to North Carolina, Barnes gave Carolina Journal Radio his assessment of key issues in the 2016 campaign. Then we turn to state fiscal policy. North Carolina policymakers have taken important steps in recent years to place state government on a sound fiscal path. John Locke Foundation Vice President for Outreach Becki Gray described key legislative decisions during a recent public presentation. She described the package of reforms as addressing a “Fiscal SOS.” Next is a look at demographic shifts. Millennials constitute one-third of North Carolina’s population and are slated to become the largest group among North Carolina adults in the not-too-distant future. Rebecca Tippett, director of Carolina Demography at UNC-Chapel Hill’s Carolina Population Center, discusses millennials’ potential impact on life in the Tar Heel State. And finally, conventional wisdom says if you want to win the presidency, you must win North Carolina. Those who think our state’s status as a political battleground is relatively new are mistaken. Dr. Troy Kickler, founding director of the North Carolina History Project, discusses the historical role and battles North Carolina is known for. That includes the Regulator Rebellion and Ratification debates.