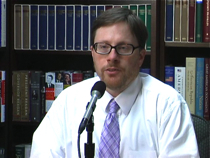 With the election over and Republicans firmly in control of the governor’s seat and both chambers of the legislature, education reformers are hoping that 2013 will be the year of reforms that have long been stifled by an unfriendly state power structure. John Locke Foundation Director of Research and Education Studies, Terry Stoops, explores the possibility of education tax credits, loosening of regulations on public charter schools, and more. Then we turn to health care issues. He no longer leads the N.C. Department of Health and Human Services, but former Health Secretary Lanier Cansler is still making his case to state lawmakers. Instead of pleading for money or a change in state law, Cansler is asking the General Assembly to think about developing a “health care vision” for North Carolina. You’ll hear highlights from his recent presentation on the topic, along with reaction from lawmakers. Next is a look at the contentious debate over electricity rates. The N.C. Supreme Court could decide soon whether Duke Energy customers will face a 7.2 percent rate increase. The state attorney general is challenging the rate hike. You’ll hear competing state Supreme Court arguments from Senior Deputy Attorney General Kevin Anderson and Duke Energy attorney Kiran Mehta. That’s followed by perspective on the presidential election. Jobs and the economy dominated the discussion during the recent campaign. But religion can play a role in campaigns for the White House as well. Ray Nothstine, associate editor at the Acton Institute and managing editor of Religion and Liberty, discusses the link between religion and presidential politics. And finally, John Locke Foundation Vice President for Outreach, Becki Gray, refutes two often-told myths about the last session of the state legislature. Gray eviscerates the North Carolina Left’s notion that the GOP-led General Assembly gave a huge tax break to millionaires and the idea that legislators waged a war on women over state funding for Planned Parenthood.