Politics Behind Call For Newby To Avoid Maps Case 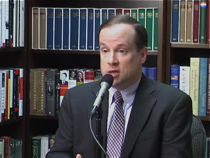 A coalition of Democrats and groups on the Left have filed a legal motioin to try to get newly re-elected North Carolina Supreme Court Justice Paul Newby to recuse himself from a decision on the state’s newly drawn election maps. They his impartiality is in question. John Locke Foundation President John Hood discusses the political motivation of the motion and the larger point of whether judicial elections should continue to be officially nonpartisan. Then we turn to energy policy. North Carolina policymakers have spent much time in recent years debating the merits of hydraulic fracturing — fracking — for shale gas. Vikram Rao, executive director of the N.C. Energy Consortium, spells out “the promise and the peril” of shale gas in a recent book. He offers some key highlights from his research. Next is a look at the sputtering economy. Ever since the latest economic downturn, North Carolina has suffered from one of the nation’s highest unemployment rates. N.C. State University economist Michael Walden has identified some key reasons why the Great Recession hit the Tar Heel State particularly hard. That’s followed by a look at the possible future of a key state asset: The North Carolina Railroad. The General Assembly’s Research Evaluation Division has rejected the notion that North Carolina should sell its state-owned North Carolina Railroad. But legislative researchers believe taxpayers could reap more benefits from railroad ownership. You’ll hear highlights from researcher Jim Horne’s recent report on the topic, along with reaction from legislators and railroad president Scott Saylor. And finally, all Durham resident Steve Pruner wanted to do was support his family by selling hot dogs from a pushcart. But he unexpectedly found himself in a court battle over oppressive state regulations and judged guilty of violating the law. Jeanette Doran of the North Carolina Institute for Constitutional Law, which represented Pruner on appeal, explains the ruling against her client by the North Carolina Court of Appeals.