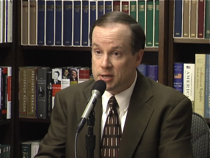 About a year ago it became evident that 2013 might be a window of opportunity for North Carolina conservatives. John Locke Foundation President John Hood explains why JLF initiated two book projects in response. Hood offers specifics on the tax reform principles included in the latest book, First in Freedom, and discusses why the code so desperately needs to be updated if North Carolina hopes to become competitive and prosperous once again. Then we turn to additional key reforms that loom on the horizon. State lawmakers will pursue education reforms again during this year’s legislative session. House Speaker Thom Tillis discussed some of his reform priorities shortly after his re-election to the House’s top job. You’ll hear Tillis’ ideas, along with suggestions from Terry Stoops, John Locke Foundation Director of Research and Education Studies. Then we turn to foreign policy. An Army Reserve unit based in Garner recently returned to North Carolina after a yearlong deployment to Afghanistan. First Sgt. HansMarc Hurd shared with the John Locke Foundation’s Shaftesbury Society some lessons learned during that deployment in one of the world’s hot spots. That’s followed by another perspective on tax reform as legislators prepare to tackle the issue. We bring you recent advice from Brent Lane, director of the Carolina Center for Competitive Economies at UNC-Chapel Hill. Lane explained why reform makes sense for this state, even though a successful reform plan will be difficult to achieve. And finally, we delve into the web of regulations that greets some mom and pop business start-ups seeking to earn a living in North Carolina. Two of those – taxicab operations and in-home beauty salons – have drawn the interest of the North Carolina Institute for Constitutional Law. Staff attorney Tyler Younts discusses the burden of the rules and why it impedes a citizen’s right to enjoy the fruits of his or her labor. Younts also explains that NCICL is looking for citizens who’ve experienced the burden first-hand.