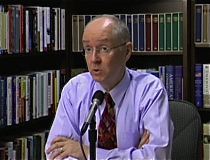 President Obama recently told a North Carolina audience that his jobs bill contains funding to save 13,000 North Carolina jobs for teachers, cops, and firefighters. Carolina Journal Managing Editor Rick Henderson examines the claim and reports on comments made by U.S. Secretary of Education Arne Duncan directly to CJ’s inquiry about the numbers. Then we turn to the influence of sports on university campuses. Some supporters of the University of North Carolina at Chapel Hill called this summer for the firing of Chancellor Holden Thorp. Were they angry about academic standards? Graduation rates? The curriculum? No, Thorp angered them because he fired the football coach. George Leef, director of research at the Pope Center for Higher Education Policy, discusses the impact of big-time athletics on universities in North Carolina. Next is a look at our state’s economy. Amid much bad economic news, state lawmakers heard one positive report in recent weeks: North Carolina compiled a budget surplus during the opening months of the new budget year. Legislative economist Barry Boardman discusses the $135 million surplus and the likelihood of state revenues remaining in the black. That’s followed by a look at a program designed to develop future leaders. As pundits and prognosticators focus on the 2012 election, we face constant reminders about the need for good leaders. The E.A. Morris Fellowship For Emerging Leaders is recruiting candidates now for its 2012 class. Director Karen Palasek outlines the Morris program’s goals and discusses the type of North Carolinian who might benefit from participation. And finally, we talk with John Locke Foundation Director of Legal and Regulatory Affairs Daren Bakst, who discusses the likelihood that the U.S. Supreme Court will accept the case and decide next year on the constitutionality of the president’s health insurance program known as Obamacare. Bakst explains the split federal court decisions to date and what is likely to catch the Supreme Court’s attention.