Should Kids Be Forced to Stay in School Until 18? 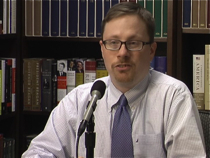 In his State of the Union speech, President Obama urged the states to raise the compulsory age for school attendance to 18. John Locke Foundation Director of Education Studies Terry Stoops assesses the president’s idea and shares data about approaches to raise student achievement and improve teacher performance. Then we turn to a North Carolina organization’s support of pro-business policies. A recent U.S. Supreme Court decision has changed the landscape for political campaigns, paving the way for so-called 527 independent expenditure groups to use corporate and union contributions to fund campaigns that are unconnected with particular candidates. Attorney Roger Knight explains how the group Real Jobs NC has relied on the high-court ruling to push for pro-business policies during election campaigns. Next is a look at a key claim of global warming alarmists. If former Vice President Al Gore is right, coastal North Carolina could sink into the sea because of global warming. But David Burton says Gore is wrong. Burton is a member of North Carolina’s Sea Level Rise Risk Management Study advisory committee. Burton recently critiqued that group’s work during a presentation to the John Locke Foundation’s Shaftesbury Society. He explained why some common claims about rising sea levels are overblown. That’s followed by a look at a key issue for college students, many of whom who have never learned about the social advantages of economic freedom. Jenna Ashley Robinson hopes to fill in that gap in the standard college education. As outreach coordinator for the John W. Pope Center for Higher Education Policy, Robinson will be sharing facts about economic freedom during presentations on campuses across the state. And finally, Carolina Journal reporter David Bass provides an update on allegations of fraud in the massive federal nutrition program known as the free and reduced-lunch program that operates in public schools. Bass discusses a U.S. senator’s concern over fraud in his state. Bass has been reporting for years on concerns about fraud and lack of accountability in North Carolina’s school-lunch program.