Social Workers To Monitor What Kids Eat At Home? 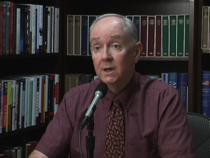 Sometime in September, a state task force looking into childhood obesity is expected to make recommendations that may include at-home visits by government social workers to monitor what North Carolina kids are eating at home. Carolina Journal Managing Editor Rick Henderson explains what may be coming for recipients of Medicaid whose kids are deemed by government to be “at risk.” Henderson also discusses another example of the government overreach at play in North Carolina. Then we turn to a well known name in the world of conservative public policy in our state. Longtime North Carolina conservative activist Dallas Woodhouse recently stepped down as state director for the grass-roots free-market group Americans for Prosperity. During a farewell speech, Woodhouse discussed some key conservative accomplishments in North Carolina during the past few years. Next we take a look at concerns expressed by State Auditor Beth Wood about one of North Carolina’s key targeted tax incentive programs: the Job Development Investment Grant. You’ll hear highlights from her recent presentation on the topic for a state legislative oversight committee. That’s followed by an in-depth look at the Affordable Care Act, or ObamaCare as it is commonly known. North Carolina’s Republicans members of Congress have offered different approaches to limiting the negative impact of the 2010 federal health care law. During a recent town hall meeting in Hendersonville, 11th District U.S. Rep. Mark Meadows discussed his strategy for repealing the law. You’ll learn details. And finally, what does ObamaCare mean to every North Carolinian? And how does the state’s Medicaid reform plan connect to ObamaCare? That’s the focus of a statewide tour by John Locke Foundation Vice President for Outreach Becki Gray and John Locke Foundation Health and Human Services Policy Analyst Katherine Restrepo. Gray and Restrepo explain why they decided to reach out to groups across the state, the key themes of their presentation, and where they’ll be speaking in September.