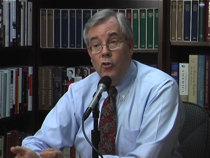 U.S. Supreme Court watchers had hoped that an opinion handed down in late June would settle, once and for all, the question of whether racial preferences are constitutional when used to decided who is, and who isn’t, admitted to college. But that didn’t happen. George Leef, research director of the Pope Center for Higher Education Policy, explains the ruling in the case of Abigail Fisher vs. the University of Texas. The university now must meet a higher barrier to justify its use of race. Fisher was rejected by the university. She claims it is because she is white. Then we turn to transportation policy. State lawmakers have signed off on a proposal from Gov. Pat McCrory’s administration to change the way North Carolina government funds road projects. Under a new funding formula, projects with statewide significance should have a better chance to secure money. You’ll hear highlights from a state Senate debate on the measure. Next is a look at the continuing debate over the autonomy of public charter schools in North Carolina. Some legislators believe North Carolina’s public charter s should be able to expand into new grades without seeking permission from the State Board of Education. You’ll hear their idea, along with criticism from the public education establishment. That’s followed by a look at a policy proposal that involves criminal justice and public safety. A bipartisan legislative proposal aims to deal with the problem of DWI offenders who might lose their jobs when they can’t drive to work. Under the plan, some offenders would be able to keep driving privileges if they install in their cars an interlock system that blocks them from starting their cars if they have been drinking. And finally, a three-judge panel of the U.S. Court of Appeals has ruled in favor of North Carolina diet blogger Steve Cooksey, who is fighting censorship of his food blog from the North Carolina Board of Dietetics/Nutrition. The licensing board red-penned his blog, claiming that he is practicing nutrition science without a license. Carolina Journal Managing Editor Rick Henderson explains that the panel ruled Cooksey can sue the board and that the case must be seen in the context of free speech rights. Henderson also discusses the broader subject of licensing boards and the power wielded by these unelected boards.