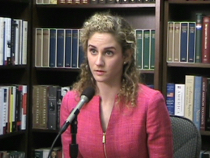 On March 4, the U.S. Supreme Court is scheduled to hear orgal argument in a case that will either uphold or gut a key provision of the Affordable Care Act – Obamacare. John Locke Foundation Health Care Policy Analyst Katherine Restrepo explains that the court will decide whether the law’s language about who can access subsidies and how, is to be enforced as written or whether legislative intent is to hold sway. She also discusses the impact of the ruling on North Carolina. Then we turn to the ongoing discussion over reforming the way North Carolina draws election maps. Redistricting reformers are working again this year to secure changes in the way North Carolina draws its congressional and legislative election maps. During a recent news conference, a bipartisan group of legislators endorsed the idea. Lawmakers also won support from two frequent political antagonists: John Locke Foundation Chairman John Hood and Chris Fitzsimon of N.C. Policy Watch. You’ll hear highlights from their remarks. Next is a look at property rights. The N.C. House has voted overwhelmingly in favor of a constitutional amendment designed to limit eminent domain abuse. Rep. Chuck McGrady, R-Henderson, recently outlined the amendment’s key provisions for colleagues. That’s followed by a look at concerns over the growing federal debt and how to address it. The federal constitutional amendment process is designed to be long and cumbersome. But Nick Dranias of the Compact for America Educational Foundation explains that his group has developed a plan that could speed the process of adding a balanced budget amendment to the U.S. Constitution. Dranias explains how that process would work. And finally, John Locke Foundation Legal Policy Analyst Jon Guze discusses legislative efforts to provide greater protections for North Carolina property owners from the potential government abuse of its power of eminent domain. He also recommends ways to strengthen any effort toward that goal.