The Legacy and Impact Of Gov. James Holshouser 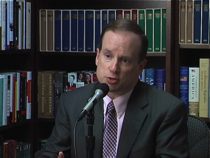 When Gov. James Holshouser passed away earlier this month, North Carolina lost of piece of significant political and policy history. John Locke Foundation President John Hood knew the former governor. He talks about the personal qualities of the man, and about the policy views of the first Republican governor of the 20th Century. Hood says Holshouser was a transformation governor who ushered in the Republican Party to North Carolina, which had been controlled by Democrats for decades. Then we turn tax reform. The debate in North Carolina has reignited discussion about the future of the state’s tax incentives for the film industry. Some legislators think it’s time to get rid of an incentive program that leads to cash payments to movie companies. Others contend the incentives are necessary to preserve the state’s film industry. You’ll hear highlights from a recent N.C. House committee debate on the topic. Next is a look at another fascinating policy debate. Some North Carolina lawmakers believe local governments should have little power to adopt smoking restrictions stronger than those adopted at the state level. Senators recently debated the idea. That’s followed by look at the latest education choice debate. As state lawmakers have debated the prospect of new opportunity scholarships, or vouchers, for low-income families that would like to send their children to private schools, they have heard from parents, pastors, and private school leaders touting the idea. Parents for Educational Freedom in North Carolina recently gathered opportunity scholarship advocates together for a news conference explaining their support. And finally, Carolina Journal Managing Editor Rick Henderson explains a new law signed by Gov. Pat McCrory that sets a lower limit for the amount of debt the state can enter into without voter approval. Supporters say the law is a long time coming and that it will protect taxpayers. Henderson explains why that is the case, and the recent history of the most common form of this kind of debt known as Certificates of Participation, or COPS.