Will N.C. Administer the ACT to All High-Schoolers? 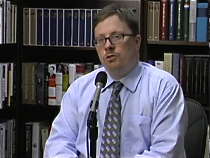 Some North Carolina education officials like the idea of administering the ACT test to all high-schoolers in order to assess their abilities and achievement. John Locke Foundation Director of Education Studies Terry Stoops looks into the idea and explains why some who were initially interested have since backed off the idea. He also discusses the use of testing in general as a way to gauge student achievement. Then we turn to the continuing debate over climate change and man-made global warming. While North Carolina’s global climate commission has disappeared, the state still faces the threat of climate-related legislation at the federal level. Americans for Prosperity recently drew attention to the issue by hosting a viewing party in Raleigh linked to the United Nations climate summit in Cancun, Mexico. You’ll hear highlights from AFP state director Dallas Woodhouse’s briefing from Cancun, along with analysis from Roy Cordato, John Locke Foundation Vice President for Research and Resident Scholar. Next we discuss pressing mental health policy in North Carolina. After operating since the mid-19th century, the state-owned Dorothea Dix mental hospital near downtown Raleigh is closing down. N.C. Health and Human Services Secretary Lanier Cansler recently explained to state lawmakers that the hospital cannot continue operations without money to fund its services. That’s followed by a look at the economic downturn and the American economic system. The recent financial crisis exposed problems with the American banking and monetary systems. George Mason University economist Lawrence H. White discusses those problems and offers some ideas for addressing them. And finally, we look at an Arizona taxpayer financing case that will be heard by the U.S. Supreme Court. Daren Bakst, the John Locke Foundation’s Director of Legal and Regulatory Studies, explains that Arizona’s law is similar to North Carolina’s matching-funds program. Thus, the Court’s ruling will have a serious impact, one way or the other, on the future of N.C.’s program, which now offers public funding for appellate judicial races and several Council of State races.