Would You Travel Overseas For Cheaper Medical Care? 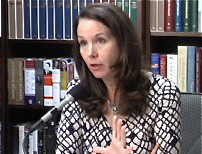 It’s called ‘crossover.’ What does it mean to you? It is the deadline by which bills either get a thumbs-up or thumbs-down from one chamber of the General Assembly. Those who get the ‘yes’ can ‘cross over’ to the other house to be considered for passage. JLF Vice President for Outreach Becki Gray explains key bills that are still alive or have died in the ‘crossover’ process. Then, we turn to the issue of better public access to the legislative process. People across North Carolina could have an easier time paying attention to the work of the General Assembly if lawmakers had their sessions televised. That’s the theory behind legislation that Sen. Eddie Goodall, R-Union, has been pushing. Goodall offers details of his plan, and you’ll hear support from Connie Book of Elon University’s Sunshine Center, Jane Pinsky of the N.C. Coalition for Lobbying and Government Reform, and Damon Circosta of the N.C. Center for Voter Education. Next, the N.C. Supreme Court recently ruled that the state Medical Board could not punish doctors who participate in the state-sanctioned procedure for executions. Rep. Tim Moore, R-Cleveland, says the court ruling should help pave the way for an end to North Carolina’s de facto moratorium on capital punishment. That’s followed by an interesting look at healthcare. It turns out that more Americans are choosing to head overseas to save costs on medical procedures. It’s a practice known as ‘medical tourism.’ Rajesh Rao, CEO of IndUS Health, explains how his company helps meet the demand for people seeking cost-competitive, high-quality medical care in India. And finally, Dallas Woodhouse of Americans for Prosperity discusses the Take Back Our State rally, which will be held in Raleigh June 3. The rally will feature special guests discussing fiscal conservatism, including Fox News contributor Mary Katharine Ham, who grew up in Durham.