Measure would require universities to allow free expression, impose penalties on those disrupting it

“As far as the principles of free speech, we’re really not breaking any new ground as to what First Amendment law has been,” Walker told Carolina Journal. “We’re just making sure that things are in place to make sure that we’re following that law properly.”

UNC schools currently operate under separate speech codes, with no overlapping policies. No particular cases of censorship or speech violations triggered the drafting of H.B. 527, Walker said, but a recent study of UNC’s campus codes helped to push the legislation forward. 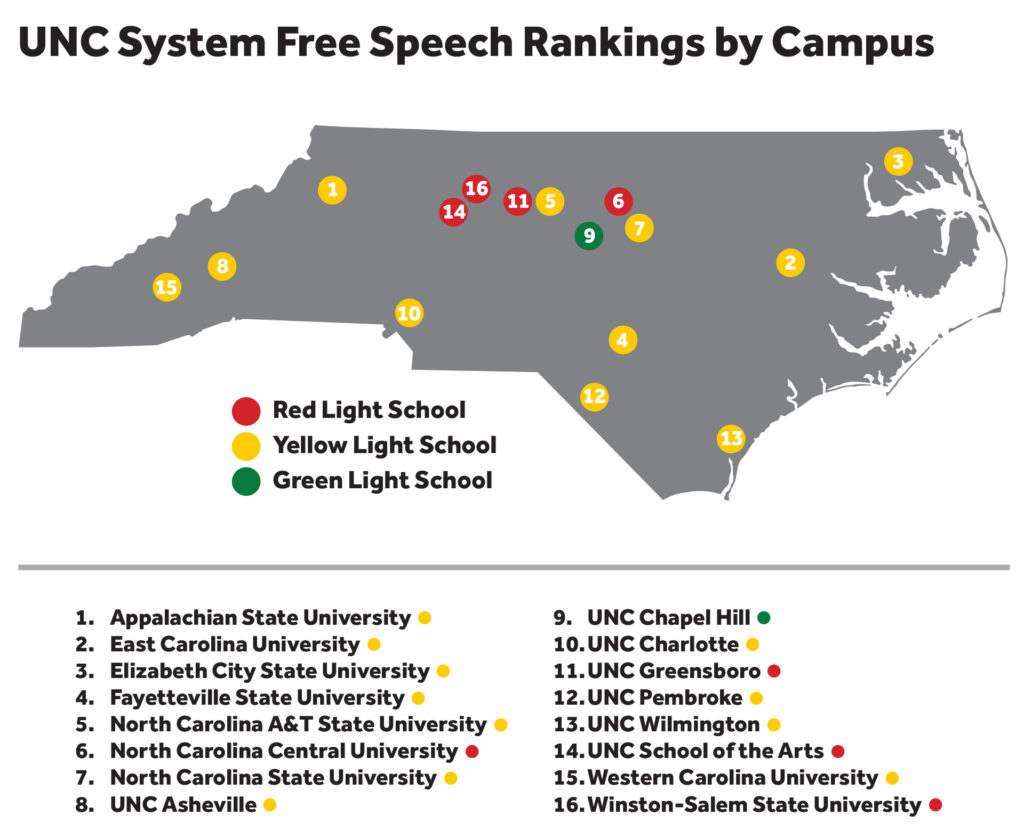 Only one UNC campus, Chapel Hill, ranked as a green-light school. Eleven others were ranked yellow, and the remaining four were designated red.

North Carolina State University in Raleigh, which has a yellow ranking, last year overhauled some of its rules after an evangelical campus group sued over free speech violations.

The plaintiff, Grace Christian Life, filed a lawsuit against the university after group members were told they needed a permit to talk about religion with students while handing out flyers on campus.

It’s this type of situation that would be preventable under H.B. 527, Robert Shibley, executive director of FIRE, told CJ.

“One hopes that with the passage of this law in some form, or something like it, we see those policies reformed ahead of time by universities so they don’t have to be sued to fulfill their obligations,” he said.

“The sticking point with free speech is that everyone agrees that free speech is important for themselves, but not necessarily for their opponents, which is why it needs to be enforced in a principled fashion. Whether it’s through laws like this, or through policies on the campus or system level, the option to censor speech can’t be there — or somebody is going to use it,” Shibley added.

H.B. 527, among other things, directs the UNC Board of Governors to adopt a campus-wide speech policy stating, “The primary function of each constituent institution is the discovery, improvement, transmission, and dissemination of knowledge by the means of research, teaching, discussion, and debate.”

The bill also stipulates that —

“A college campus in America should be the one place that has the greatest range of free speech,” he added.

However, Powers is concerned about one part of the bill, permitting lawsuits in the case of “expressive rights” violations.

“I’m not a big fan of expanding the ability to bring lawsuits. That’s not my preferred remedy. Having been involved, and having watched the university be involved in lawsuits, it’s a time-consuming and costly matter for the university,” he said.

A university-based appeals process, which already is used in other instances, might be a better solution, Powers said.

Walker said the parties involved in supporting h.B. 527 were open to making changes if needed.

“We’re willing to work and get something we can all agree on as long as the principles are the same. And that’s the good thing,” he said. “We agree on the principles of the thing. [Any disagreement] is more about logistics than it is about any question of ‘are we going to partake in free speech or not?’”

Supporters of vaccine passports, which can be faked and forged, are dividing us even more