Fifteen of 16 schools within the University of North Carolina system restrict free speech, a new study from the Foundation for Individual Rights in Education shows.

Only one of those institutions last year cut the First Amendment even a little extra slack. 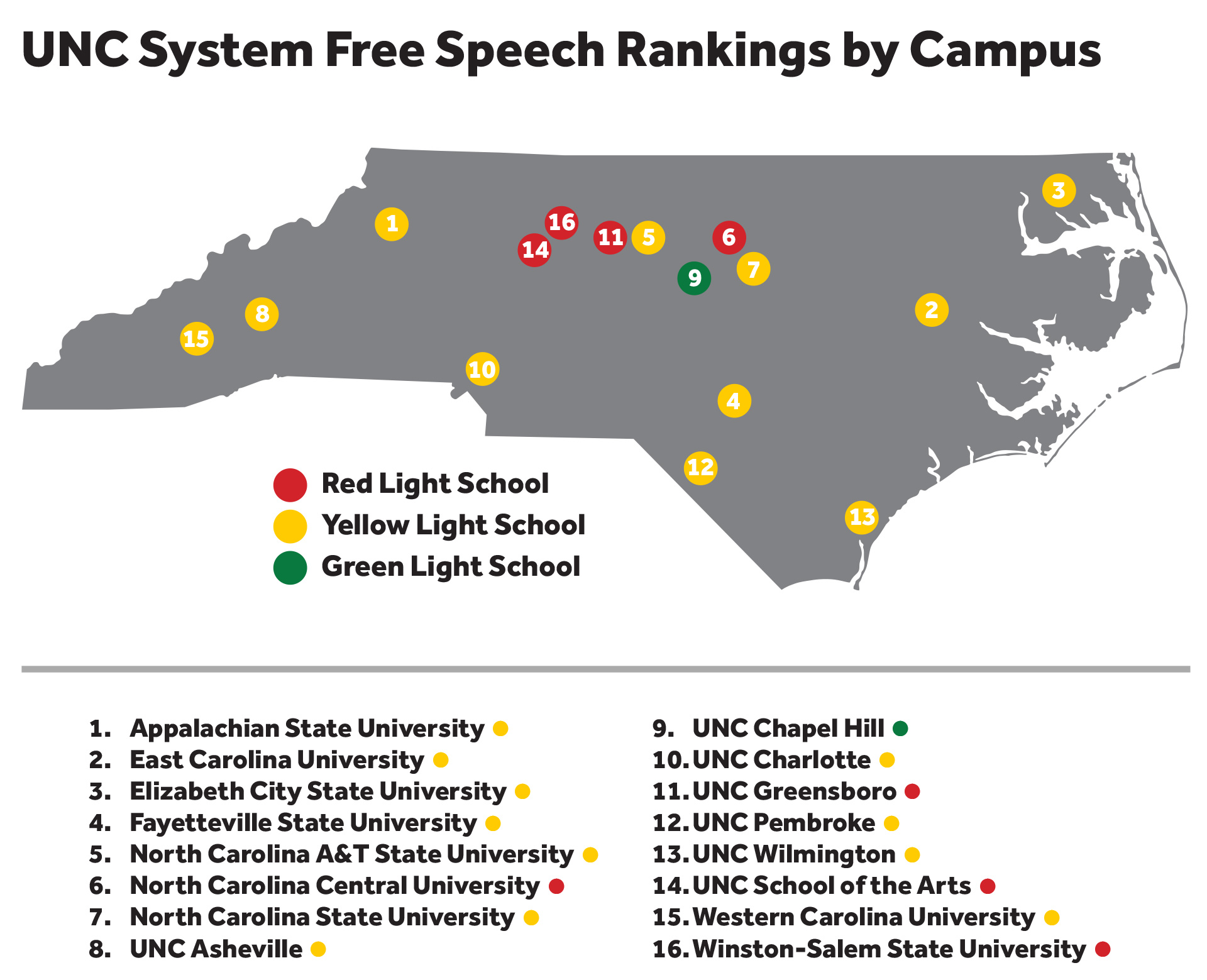 UNC has improved steadily over the past nine years, moving a majority of its schools from red to yellow, Harris told CJ. But all yellow-light schools are still of major concern, the report says.

Though FIRE scores are moving in the right direction, threats to speech rights are still a major problem, and much work remains, the study states.

“Orwellian programs under which students are asked to report on one another for offensive speech—are proliferating at campuses nationwide,” the study states. “Student demands for censorship are increasingly common. The federal government continues to press a definition of sexual harassment that encompasses not only actual harassment but also constitutionally protected speech. And an unacceptable number of universities continue to punish students and faculty members for constitutionally protected speech and expression.”

Nationwide, 27 schools received a green-light rating, up from 22 schools the previous year. UNC Chapel Hill, the only UNC school to land a spot in the green light category, should set an example for the entire university system, Harris told CJ.

“Chapel Hill’s green light rating is pretty recent, so that’s a good thing, and we’re hoping that the other universities will follow suit,” she said. “There are some states where the entire [state university] system will have a policy that puts it into the yellow or red light categories. The good news is that isn’t the case in North Carolina, so there’s not some sort of big bureaucracy standing in between these universities and a green light rating.”

UNC’s administration isn’t able to dictate policy reforms for each school, but system leaders can encourage universities to ease up on “speech zones” and other unconstitutional policies, Harris said.

Free speech already is — and will continue to be — strongly supported across the system by university leaders, UNC President Margaret Spellings told CJ.

“Although we do not approve individual campus policies that may touch on free speech, as a University, we are wholly committed to ensuring that all our institutions are welcoming and inclusive places for all members of the campus community to learn, work, and grow,” Spellings said.

“As reflected in our Code and policy manual, there are some common, system-wide expectations related to faculty and students’ responsibilities to maintain a campus climate of mutual respect. This is essential to fulfilling our educational mission,” she continued.

The only way to fix the problem is by asking each university to overhaul its speech codes, Harris said.

“Generally speaking, it’s policies from individual departments that might be a yellow or a red light, and you really do need to work with each school to make sure that reform can happen,” she told CJ.

Just less than 40 percent of both public and private universities nationwide continue to enforce red-light policies, the report states.

Since only public universities are legally bound by the First Amendment, free speech arguments are more prevalent at state schools, as private schools are far less affected by such controversies, Harris said.

The Nikole Hannah-Jones debacle was all manufactured outrage