A task force assembled by Lt. Gov. Mark Robinson designed to give a voice to parents and students in identifying political bias in public school classrooms released its first report on Tuesday.

In March, Robinson established a task force on political indoctrination in public school classrooms known as F.A.C.T.S., standing for Fairness and Accountability in the Classroom for Teachers and Students. The task force’s first report documented over 500 submissions from parents across the state.

“Our task force set about to answer one question: Is there indoctrination happening in our public schools. After doing this report and after doing this task force, the overwhelming answer is yes, it is,” said Robinson during a press conference on August 24.

“This is not an attack on educators or education,” Robinson added. “This is an attempt to stop the abuse of the teaching profession by a few who are using that profession to put undue pressure on young minds to accept their way of thinking.”

Robinson pointed to two specific examples to demonstrate instances of bias in the classroom. The first is a book called “George” given to fourth-grade students in which the character questions his sexual identity and talks about removing his genitalia. The second example is of the Governor’s School where students are compelled to answer questions about their sexuality. 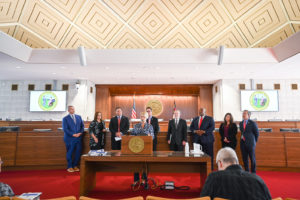 The majority of people who submitted their accounts asked not to be identified for fear of losing their jobs as teachers or counselors. Others, from parents or family members, expressed concern that their children would be penalized for revealing the actions of their teachers.  One parent reported to the task force that both children’s teachers were using biased instruction and commentary.

Included in the report and its summary is examples submitted from across the state with approximately 20% of submissions coming from Wake County.

“That does have anything to do with education,” said Robinson, a Republican and the first black man to hold the lieutenant governor’s position in the state’s history. “That is not the road we need to be on.” 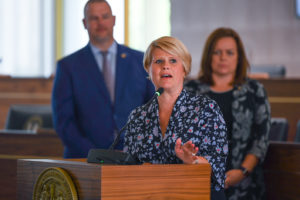 Superintendent of Public Instruction Catherine Truitt also spoke at the press conference and emphasized that no student should be marginalized for their race, beliefs, or background.

“This report signals the beginning of a transformative moment in the history of North Carolina public schools,” said Dr. Terry Stoops, director of the Center for Effective Education at the John Locke Foundation and also a member of the F.A.C.T.S. task force. “Seldom have so many parents been so focused on assessing the quality and relevance of the day-to-day educational activities of their children.”

“This report should be required reading for anyone doubting the presence of critical race theory and social justice claptrap in North Carolina public schools,” Stoops added. “While the submissions are not indicative of the scope of the problem, it is undeniable there is a problem. I suspect that subsequent task force reports will add critical context to an issue of tremendous importance to families across the state.”