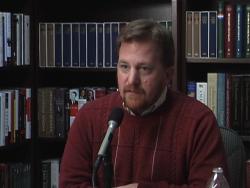 Today many of us think of Edenton as a beautiful, quaint vacation town along the Albemarle Sound. But Edenton was a political and intellectual hub in North Carolina in the early days of the United States. Edenton’s fascinating early history is chronicled in a book called The King’s Trouble Makers: Edenton’s Role in Creating a Nation and State. The author of this book is Dr. Troy Kickler, founding director of the North Carolina History Project. Kickler discussed the book with Donna Martinez for Carolina Journal Radio. (Click here to find a station near you or to learn about the weekly CJ Radio podcast.)

Martinez: I’ve got to ask you about the title. Tell us why you chose that title and also why you chose Edenton. Considering all the incredible history that we have in this state, why that town?

Kickler: Well, first, let me address the question of the title. Although many of the founders from Edenton were loyalists — supporters of the crown, if you will, until like a few years before 1776 — they had really started to change their political opinions [in] 1774, 1775, and 1776. They proved to be, how shall we say, a thorn, intellectually speaking, a thorn in the side of King George III.

And I chose Edenton for a few reasons. One is I have a satellite office there in the Barker House, the home of one of the founders that is talked about in the book. So I frequent the office quite a bit. And as I looked at these architectural gems, as you alluded to, by the Albemarle Sound, I was reminded — it sort of kept history alive, those architectural gems, the historic preservation there. And so I started doing some more research, purposefully, and then unintentionally on other projects, I would come across information about Edenton.

Martinez: I love the title of the book, and you’ve explained the phrase “troublemakers.” Tell us a little bit more about the politics and what went on in Edenton.

Kickler: … I could talk about it for a while, but some of the politics that happened in Edenton, well, there for a while, for example, the general court as it was called then — the equivalent of today’s state Supreme Court — met in Edenton at the courthouse. Governors resided in Edenton at the courthouse. Lord Granville, the only Lords Proprietor of Carolina, one of eight, who didn’t sell his land back to the Crown, had a land office in Edenton, and that’s where Francis Corbin did business.

So, for example, when Bishop Spangenberg, a Methodist minister, wanted a tract of land out in the Piedmont, that later became known as Wachovia. People had to travel to Edenton to do business, if they wanted to purchase land, because that’s where Lord Granville’s land office was.

As we approached the war, you had very important people who are living in Edenton. Revolutionary War pamphleteers like James Iredell, Hugh Williamson — their essays and articles were read, and not only in papers in North Carolina but also outside the state, as far north as Philadelphia, as far south as Charleston.

Martinez: It sounds, Troy, like it functioned almost as Raleigh does today: kind of the hub of government and political leaders. Is that a fair characterization or not?

Kickler: For a period of time, yes, that is a fair characterization. And when I say a period of time, I’m talking about the early 1700s. It was not only a political hub, but it was an economic hub as well. It was a thriving port town; one of the colony’s biggest rope-making businesses was in the town of Edenton. You think it’s an era when trade is mainly done by ship. There are many people who earn their living by fishing as well, so this port town, it’s no surprise that it would have one of the largest rope-making businesses there. The research said that the rope-making business in Edenton was about — it covered about 130 acres.

Martinez: Now you mentioned some names, and you used the word “pamphleteer.”

Martinez: Tell us more about why you say this was an intellectual hub. Who was there, and what were they writing about and talking about?

Martinez: So these were thinkers of the day.

Martinez: But Edenton, Troy, also has some history related to women, and women doing some things that, for the time, were considered pretty bold or provocative even.

Kickler: Well, yes. And that’s why I talk about Edenton’s founders and not founding fathers. And it’s because, as I mentioned before, I have an office, a satellite office, at the Barker House in Edenton, which is [the] home of Penelope Barker. And she, according to history, was the mastermind of what has become known as the Edenton Tea Party, which was when a group of 47 to 51 women signed a petition, and in doing so, they told the British Parliament, the British Crown, that they would not support the increased taxation measures that were being put in place in the early 1700s.

Signing a petition does not seem like a bold political act today. In fact, if you walk down [the] streets of Raleigh, people ask you to sign petitions for this cause and that cause when sometimes all you want to do is just go and get lunch and come back to work. But signing a petition in 1774 was women stepping into the political sphere, normally an arena reserved for men. And women had done that in the past, but this was the first organized, collective action of women that we know about, anyway, in the history of the United States.

So it was a bold move, and there were political cartoons being sketched for British newspapers at the time. So news of it traveled across the Atlantic Ocean. And sometimes, I imagine — I’m sure King George III kept up, read the newspapers — and sometimes I imagine what he thought when he read, not only about American colonists who were protesting the British Parliament and British Crown, but there were female American colonists protesting the British Crown.

Martinez: Such a scandal for the time, that’s for sure. Troy, it sounds like a great book. Tell us where we can get it.

Kickler: Well, if you go to the North Carolina History Project website, northcarolinahistory.org, you can find more information.

McCrory in the U.S. Senate race: What are his chances?