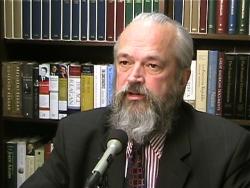 Americans have a constitutional right to bear arms or, in modern language, to own and keep guns. Commit a felony, and the government can limit your gun rights. But what happens once a felon has served his sentence? Attorney Dan Hardway addressed that question during a presentation this year for the John Locke Foundation titled “Felons, Firearms, and the Second Amendment.” Hardway also discussed the issue with Mitch Kokai for Carolina Journal Radio. (Click here to find a station near you or to learn about the weekly CJ Radio podcast.)

Kokai: Your role in this became very high-profile when you represented a man named Barney Britt. Tell us briefly about his case.

Hardway: Barney was a businessman in Raleigh and at the time, in 2004, I represented some of Barney’s businesses. Barney had been denied a right to purchase a rifle in 2004 and came to see me to see whether or not there was anything I could do. It turns out that back in 1979, when he was a very young man — late teens, early 20s — he had committed — or he had been charged with — possession and sale of a narcotic drug, and on the advice of his attorney, he had pled guilty to a felony.

When he got out of jail and finished his probation, he got his firearms rights back five years after the completion of his sentence — the way the law worked then. That was 1987. Between 1987 and 2004, Barney had become an avid hunter, he had inherited guns from his family — from his father, from other members of his family — and when he was denied the right to own a gun, we went and talked to [Wake County] Sheriff Donnie Harrison and found out from him that as of Dec. 1, 2004, the legislature had changed the law and that it would be absolutely illegal for Barney to own any gun, anywhere, any time, of any kind.

And consequently, on my advice, Barney got rid of his guns because he did not want to be a felon. He had gone since his charge in 1979 without ever having any other crime on his record other than minor traffic citations. And we sued the state. And that suit was filed in Wake County Superior Court in 2005 and eventually worked its way to the North Carolina Supreme Court, where the North Carolina Supreme Court decided the case in late 2009.

Kokai: And in deciding the case, we won’t get into all the details, but they basically decided in his favor. Now in response, the General Assembly changed the law. And so instead of having people like Barney Britt getting their gun rights restored in the way that the law used to provide for, now it’s even tougher to get gun rights back?

Hardway: What they had done in 2004 — there was no possibility to get your gun rights back under the law as they wrote it in 2004. Felons were forever banned — all felons, no matter where the felony was, no matter what the felony was. In North Carolina, you can be a felon if you have a beach bingo game with a prize of more than $50, and if you did that you would lose your rights to ever own a gun. If you are a notary and you notarize a document the day after your commission expires, you’re a felon. You would lose your right to ever own a gun under the 2004 law.

As a result of Barney’s case, the General Assembly put in a provision that allows felons to apply for restoration of their rights. It’s a very narrowly restricted exception. Most felons still will never own, or never have, the right to own a firearm in North Carolina. But a felon who has only one nonviolent felony, who has waited 20 years after the completion of his sentence, can apply to District Court in the county where he has resided for at least one year to have his rights restored. Those rights will be restored if he doesn’t meet a long list of disqualifiers that are in the statute, as well as avoids the snares and the traps that are built into the statute to trap the unwary practitioners.

Kokai: Now in specifying this in a presentation for the John Locke Foundation, you went through some of the qualifications. We heard how absurd they are. Why is the situation, as it stands now, a bad one for us North Carolinians and the protection of our constitutional right to bear arms? Why is this system something that we need to fix?

Hardway: The issue is much broader than just felons and firearms. The issue is the fundamental rights guaranteed to the citizens by the Constitution. You know, it’s a hard thing for a lot of people to understand or grasp, but just because a person commits a felony doesn’t mean that he loses his constitutional rights. You don’t; a felon doesn’t. Those rights, the fundamental enumerated rights in the first 10 sections of the United States Constitution Bill of Rights, are fundamental rights that are not given to us by the government. The purpose of the Constitution is to limit the government, not to limit us.

And if we create this precedent that a felon can have his fundamental rights taken away, absolutely taken away, there’s nothing to limit that to just the Second Amendment. The rationale is that felons are dangerous people — most of them aren’t, incidentally. Many of them are, and we’re not talking about those that are. But if we can take away their Second Amendment right, why can’t we take away their Fourth Amendment right to be secure from searches and seizures? Because wouldn’t we all be a lot safer if the police could search an ex-felon at any time? Wouldn’t we be a lot safer if ex-felons didn’t have the right to have a lawyer in their second felony trial, if they were ever charged again?

It would make the administration of justice so much faster, so much more efficient, so much less expensive for the taxpayer, and it would make us so much safer by making it easier to get these people off the streets. But the point is, they are fundamental rights. They are rights that we respect. And if we don’t respect the least of our citizens’ rights, we will soon not respect any of our citizens’ rights.

Kokai: So moving forward, if the General Assembly were going to take steps that would be good ones, what should we do? What should be the standard for a rehabilitated felon who wants to have gun rights restored?

Hardway: I think the system worked very well prior to the changes in 1995 and 2004. The law automatically restored a felon’s rights after five years. If he went five years without recommitting, his rights were restored. Most felons, if they are going to recommit, do so within three years. A felon who makes it five years is not likely to recommit. The statistical likelihood of a felon after five years recommitting is the exact same as someone who has never committed a felony.

That system worked very well. That system had survived constitutional challenge. This system is not surviving constitutional challenge. The other thing that can be done is to broaden the application process so that any felon who thinks that he is no longer a danger to society can present that evidence to a district judge and regain his rights. Why limit who can apply for relief on a fundamental issue?