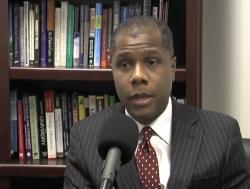 Government health care is bad medicine. That’s the case libertarian syndicated columnist Deroy Murdock makes as he discusses the impact of the federal health care reform legislation signed into law in March 2010. Murdock, a senior fellow with the Atlas Economic Research Foundation, recently shared his concerns about ObamaCare with Mitch Kokai for Carolina Journal Radio. (Click here to find a station near you or to learn about the weekly CJ Radio podcast.)

Kokai: You have a full half-hour presentation making a point-by-point case against ObamaCare, but what’s the most compelling reason to reject this government intervention into health care?

Murdock: I think the most compelling reason why government health care is bad medicine is, ultimately, it seems to kill people. You look at Canada, you look at Great Britain, and you look at the life expectancy — or I should say the fatality rates, the survival rates from cancer, and they’re often worse in Canada, much worse in Great Britain. So you can talk about saving money. You can talk about the lack of complexity in our system versus the British system, for example, but ultimately the issue is: Do you live longer if you get a disease? You live longer here than you do in those places.

Kokai: Even if ObamaCare doesn’t work, many people agree there are problems with American health care. Does the federal health care reform law do anything to address legitimate problems people have identified?

Murdock: I think the trouble with ObamaCare is that it tries to do too much to address too discrete a problem. We have, according to the advocates of ObamaCare, about 46 million Americans who lack health insurance. Now, if you take a look at that number, [you’ve] got a lot of people who either have Medicaid but tell surveyors they don’t have coverage or people who are eligible for programs but don’t sign up. So that 46 million figure is overblown. But even if you do accept that 46 million figure, why are we taking the entire medical system for 300 million people, turning it upside down, in order to address the needs of 46 million people? It’s too ambitious a program for too specific a smaller problem. And so I think in that respect it really is collapsing of its own weight because it’s too, too aggressive.

Kokai: In addition to concerns about access, there have been concerns about the rising costs of health care. Is there any evidence that ObamaCare would help reduce cost?

Murdock: One of the arguments that the advocates of ObamaCare presented is that ObamaCare will reduce costs and bring down the cost curve, as the saying goes. What we’ve seen so far is that the cost curve actually is going up, not going down, and health insurance premiums are going up. A lot of people are opening up their statements from their insurance companies, and for next year their rates are going up anywhere from 5 to 6 percent to 8 percent. I think up in New York state [it’s] as high as 30 percent in some cases. So after all this debate and all this hue and cry, the costs are supposed to be going down, and all we see is costs going up. We’ve seen major companies, like AT&T and Verizon and others, declaring huge charges against future earnings. They’re taking charges against future earnings because of the additional costs that Obamacare is imposing on these companies. So I see costs going up, not going down, as a result of this so-called cost-saving measure.

Kokai: Even if we were able to see some cost savings, would we see some sort of negative impact in terms of access to care or quality of care?

Murdock: I like to use the example if you normally have 20 people at your Thanksgiving gathering every year and all of a sudden you’ve got 28 people showing up. Well, you’ve got eight more people sitting around the table, and somehow this is going to reduce costs? The only way this reduces costs is if you decide instead of serving turkey and mashed potatoes and pumpkin pie that everybody gets Pop Tarts and a glass of cold water. Well, that will bring costs down for sure. It won’t be a very memorable Thanksgiving dinner, not in a good way, anyway. And this is what we have with ObamaCare. Either the cost will go up because we maintain the same quality level, or we lower the cost by offering people lower-quality medicine.

Kokai: Some people might support the idea of government health care because of the possible positive impact on complexity. Now you might have to haggle with an insurance company. You don’t know what’s covered, what’s not covered. What forms do I fill out? Would Obamacare reduce any of this complexity?

Murdock: I think, from the standpoint of the patient, if we move to a full British-style system — as the Brits like to say, “Free at the point of service” — you might have the convenience that you can show up somewhere and go in and get treated and walk out the door, and not expect to see paperwork afterward. Maybe that’s a good thing. I think … the flipside is we’ll probably wait in line a long time. You’ll do like what the British do, which is they wait, and they wait, and they wait to see doctors. In the Canadian system, they wait, on average, according to the Fraser Institute, almost nine months to see orthopedic surgeons.

So if you hurt yourself playing tennis or playing baseball or something, and you’ve got to wait nine months, maybe you don’t have to worry about any paperwork, which is good. The bad news is if you’ve hurt your arm or hurt your leg or something, it may heal in place along the contours of that injury. So you’re going to walk around with an injured leg or an injured arm for the rest of your life because it’s set that way. Now, is that worth the advantage of not having any paperwork? I would tend to doubt it.

Kokai: Have the most vocal advocates of federal health care reform thought at all about the trade-offs or about the fact that if you increase access to health care, people are going to want more health care?

Murdock: I don’t think the advocates of ObamaCare have thought through this proposal at all. I don’t think they’ve thought about the unintended consequences. I think they’re really living in a fantasyland where they think they can bring in 30 million people into the system who are not in, offer them coverage, and have costs go down rather than up. I mean, this is a basic abrogation of the entire concept of supply and demand. This is a lot of wishful thinking, at best. I think there are a lot of people who really see this as a big government power grab, which really is what it’s all about, which is — we can’t have all these people making their own independent, individual decisions. We, the anointed, have got to make these decisions on their behalf, so let’s get our big arms around them.

There are probably some people who are not quite as cynical as that, who I don’t think have thought this through very carefully, but you have a lot of people involved in putting this thing together who are not doctors, don’t have any medical background. A lot of them aren’t even economists. They’re lawyers and academics and theoreticians, and don’t have any real-world understanding of how these things work.

Kokai: The recent elections seemed to show a lot of concern about ObamaCare, but that doesn’t mean everyone loved the system we had before. So what do we do about it?

Murdock: Well, I don’t think to be opposed to ObamaCare as I am — I want to see ObamaCare repealed at the earliest human possibility — but that doesn’t mean we need to go back to the system we had. The system that exists in this country with ObamaCare now creeping in has all sorts of problems. It really is a hybrid of something that’s partially private, but with a lot of public involvement and intervention. For example, I live in New York state. I cannot get what I like to call “bus crash insurance,” which says if I get hit by a bus my insurance will put me back together and get me back home in one piece, period. I have all sorts of extra stuff as part of my health package. I believe I’m covered for acupuncture. I believe I’m covered for hair replacement. I know I’m covered for in vitro fertilization, which is utterly useless to me, and I’m paying for all this.

Now, if you go to a restaurant and all you want is a Coke and a burger, and all of a sudden you’ve got a burger and a Coke, and a lobster thermidor, and champagne and caviar and duck a l’orange, and the tab comes and your simple maybe $10 lunch turns out to be $85, well, that’s nice you have all these extra things, [but] you didn’t want them and you’re paying for them. And this is part of the system we have. We have mandated benefits. You can’t buy insurance across state lines. You have this really unusual, very bizarre situation where patient A goes to doctor B, and the bill goes to insurance company C. So I don’t care as a patient what the doctor charges because I’m not going to pay for it.

So until you get some connection between the patient and the doctor actually talking about prices, and I’m not talking about negotiating with a heart surgeon as you’re coming in with a heart attack on a gurney, but if you come in for maybe having a sports injury taken care of, or having a rash taken care of — more routine type of things — if you have doctors and patients talking about prices, you will see pressure to bring prices down because people will be able to make comparisons, which they can’t now.

So, in many respects, we have a system without prices, and where you have a system without prices you have, at best, a flawed market. So I think we need to get rid of ObamaCare and replace it with a robust system of individual accounts, individual insurance policies that people own and control and [are] able to carry from job to job, city to city, across state lines, across the country, and have people own and carry their health insurance like they own and carry their private checking accounts, car insurance, home insurance. And if you have that sort of situation, I think you’ll have something which is much more responsive to patient needs, much better than what we have at the moment, and much, much better than what ObamaCare threatens to impose upon us.