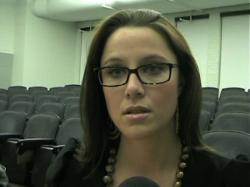 Feminists should declare victory, then go home. That’s one way to summarize conservative columnist and author S.E. Cupp’s response to today’s radical feminists. She believes their ideas resonate with very few young women today. Cupp explained why during a recent presentation at North Carolina State University. She also discussed feminism with Mitch Kokai for Carolina Journal Radio. (Click here to find a station near you or to learn about the weekly CJ Radio podcast.)

Cupp: In 1970, Gloria Steinem wrote that the purpose of the women’s liberation movement was for men and women to unlearn the popular wisdom that taught us “patriotism means obedience, age means wisdom, woman means submission, black means inferior.” If we go by that statement, I think the movement was largely successful.

In 2005, a CBS News poll found that an overwhelming majority of women said their opportunities to succeed in life are better than the opportunities their mothers had. Nearly 70 percent of women said that the movement had made their lives better. OK. So if we believe that feminism has generally succeeded — and I think that women like me, whose world views aren’t informed by the angry identity politics of the ’60s and ’70s, are proof that women’s rights have been won — then it’s time for the movement’s flag bearers to maybe turn their attention elsewhere. But they’re not, of course.

Marcia Pappas, who was head of the New York state chapter of NOW, National Organization for Women, said to me, “Women are still not represented in the U.S. Constitution. Men are still not willing to give up their power. They think that giving up power makes them less powerful.” That was last year she said that. That’s the kind of rhetoric — anti-man, anti-state, anti-family — that lacks the resonance it probably once had. Now it just sounds dated and bitter, and especially to women in my generation. I have to assume to women in [college] as well. I mean, it sounds foreign to me.

Women of my generation, especially conservative women, believe that feminism’s ultimate success is that we don’t need it anymore. We’re women who see any initiative that separates the sexes as sexist, not feminist. We’re women who are uncomfortable with being positioned as victims of anything, let alone of our gender. We’re women who believe that men are just as qualified to speak about the importance of women’s issues as women are — that propping women up by pushing men down is an insult to our fathers and uncles and brothers and mentors and all the men who have helped us along the way.

Kokai: One of your key themes seems to be that old ideas about feminism are simply out of date.

Cupp: They are. And unfortunately, they’re being trotted out as if they’re still relevant. And I think the success of feminism is that we don’t need it any more. We should be acknowledging just how far women have come, just how many choices we have. And instead, what I think a lot of militant feminists are doing is spending time highlighting our differences, drawing lines in the sand between conservative women and liberal women — what makes a woman a woman, which women are traitors to their gender. I don’t think that advances a productive storyline.

Kokai: How do these outdated notions about feminism hurt the effort to improve conditions, not just for women, but for everyone?

Cupp: Well, the message, of course, is, I think, largely defeatist. When you’re segregating women, putting the Sarah Palins in one category and the Gloria Steinems in another category and the Hillary Clintons in another category — which is the project of feminism: to segregate women out — I don’t think that’s empowering. I don’t think that’s advancing a message of tolerance and equality and equal rights. It’s pretty hard to convince people that you want more tolerance when there’s an entire demographic of women that you don’t consider to be relevant or valid.

Kokai: Do you think there are a lot of women out there who share your conservative ideas but decide not to speak out? They just don’t want to hear the criticism?

Cupp: You know, I’m sure there are. I’ve been really heartened to find so many women of varying ages who are willing to talk about being a strong, proud, conservative woman. I see it, in particular, among young people. And I think if you look at the evolution of the Tea Party over the past two years, you’d find that a lot of it has to do with women. They’re moms who are worried about their kids’ future and their grandkids’ future. They’re worried about their pocketbooks and their checkbooks.

So I think women, and especially conservative women, are really finding their voices again. And I’m sure it’s hard for some of them to speak out in very liberal, hostile places. But I live in Manhattan. You know, I’m in New York City. I’m in a very liberal field in the media. I grew up in, you know, liberal land. I think if I can do it, anyone can do it. I’m not exactly, you know, Rosie the Riveter. You know? I sort of — I’m fairly risk-averse. So I’m not sure that we live in an era where, you know, we have to be all that afraid any more. I hope we don’t.

Kokai: How much of this is an age issue? Are younger women more inclined to speak up and to ignore the criticism?

Cupp: Oh, well, exactly. I think people in my generation and younger grew up without feeling like their gender was a burden or an obstacle, or something they would have to circumvent. I certainly didn’t, and I didn’t grow up in a privileged kind of, you know, atmosphere.

So I have to imagine that if I never considered being a woman as an obstacle, then most people my age didn’t. I’m sure there are exceptions to that, in certain fields, but if that’s the case then feminism, I think, has been largely successful and should, therefore, sort of [put the] nail in the coffin — over with, done with. I don’t want to have to think of everything through the eyes of a woman. I don’t want to see policy ideas through the prism of my gender identity. I don’t think it’s relevant, and I don’t think we should have to. That’s being a slave and a victim to identity politics, and I just don’t think it’s relevant any more.

Kokai: Are conservatives going to win this battle over the future of feminism any time soon? It doesn’t seem likely that these older feminists will just, as you say, strike the nail in the coffin of feminism.

Cupp: They’re going to be working very hard, for years to come, to keep feminism relevant. And, of course, the longer it goes on, the sillier it will look. But, that said, you know, they’re always going to co-opt new issues as feminist issues. They’ve done that with gay rights, for example. Feminists have co-opted gay rights as a feminist issue. I mean, I guess there’s some academic point to that. But they’re going to do that, you know, with countless issues over the next 100 years, I’m sure. Because again, the point is to remain relevant, and if they don’t have anything to complain about, if there aren’t any problems, well, they have to invent them or borrow others.

Kokai: Do you have a positive outlook about the direction this debate is going?

Cupp: I really do. Because as jaded as I am, as a 32-year-old, I have to think that the generation behind me is even more cynical, when it comes to the angry identity politics of the ’60s and ’70s. I have to think it’s even more foreign a language, to them, as it is to me. And I have to hope that when they are the people who are in power and running the country, that they’ll have very little patience for this kind of race baiting, gender baiting, sexism, misogyny. I hope that that’s the case. So I am cautiously optimistic.