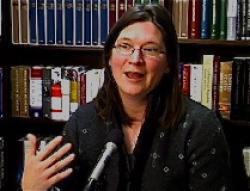 Some people refuse to recognize the wisdom of America’s Founders because many of them maintained ties to the institution of slavery. Seventeenth-century English philosopher John Locke gets the same treatment. But Locke’s attitude about slavery is not so easy to pin down, as Holly Brewer, associate professor of history at North Carolina State University, discussed with Mitch Kokai for Carolina Journal Radio. (Click here to find a station near you or to learn about the weekly CJ Radio podcast.)

Kokai: One of the key reasons for your presentation [to the John Locke Foundation’s Shaftesbury Society] is that you recently made an interesting discovery about John Locke and his role in dealing with this issue of slavery. What’s the key finding that you’ve found that made you say, wow, this is important?

Brewer: It’s clear that when Locke had a position of real power in the empire, which he did in the 1690s after the Glorious Revolution, that he tried to undercut the development of slavery in that empire in substantial and comprehensive ways. It didn’t go as far as he would have liked — partly because neither he nor his mentor William III were in power long enough, and it takes a lot of time to do this when you’re talking about sea journeys — but he made a real effort to undercut slavery.

Kokai: We’re going to get into some of the details of that, but first of all, let’s go back to some misconceptions that some people have about John Locke. You mentioned in your presentation that a lot of people say John Locke wrote quite a bit about equality of men, but if you look at what he actually did and some of the documents with which he was involved, it shows he supported slavery and wanted to promulgate slavery.

Brewer: Right. That’s been the argument that has been most persuasive in the academy for the past 30 years — that somehow if you understand the British Empire and American colonization themselves as always liberal — which is in accordance with John Locke’s ideas that are against hierarchy and for democratic government — then somehow Locke himself somehow needs to support slavery, because slavery develops in these years as well. And he’s associated with writing and in particular a document called The Fundamental Constitutions of Carolina much earlier in his life, when he was in his 30s, that supported nobility and slavery both. This is in his own handwriting, so people have been arguing that, at least in practice, Locke supported slavery. And this makes it sort of a neat story — that somehow American liberty and American slavery grew up together. It’s the American paradox.

Kokai: But you mentioned in your presentation, that was an earlier Locke.

Brewer: That’s what I’m arguing against, exactly. What I’m arguing is that the ideas that supported slavery and, in fact, the actual logistical support for slavery comes not from liberals, but from people who believed in the divine right of kings. And that it’s under the Stuarts — Charles II and James II, kings of England — that slavery first begins to be introduced in the empire. They’re literally two sides of the same coin. I talked about the guinea, the gold coin which has the head of Charles II with an image of the slave trader below his head, which he first creates with the gold from Guinea in Africa and the profits from the Royal African Company, which he founds when comes to the throne. And the first laws that make slavery hereditary anywhere in the British Empire and create the distinction of slavery come also with the Stuarts.

And this fits with the idea that everyone is born to a place in society and that people lower down in the social order have the obligation to “order themselves humbly and reverently to those above them.” So slavery is not born in liberalism. Locke is arguing against this. His Two Treatises of Government, which all the Founders read and were influenced by, especially in the Declaration of Independence, are a reaction to those ideas and to the ideas laid out in the Fundamental Constitutions of Carolina, which is really a Stuart document — you can see it that way — part of the Stuart empire.

When he was in a position of real power, he did everything he could to change the course of empire. This is after the Glorious Revolution, the Stuarts have been displaced, and with them their ideas. And instead, there is much more emphasis on government based on the consent of the governed, on the principle that all men are born equal at least — even if they’re not perfectly equal, but at least they should be equal under the law — and Locke really tries to implement those ideas in the empire and to undercut slavery.

Kokai: Now we’ve been mentioning John Locke and his important role. What are some of the ideas that John Locke espoused, especially in the late 1600s, [that] a couple generations later American Founders were using to help serve as the cornerstones of this country. What were some of those big ideas he had?

Brewer: I just mentioned the crucial ones, and maybe I should explain the connection between them. John Locke was arguing against the idea that people are born to a place in society and that kings have a right to rule because God put them there, and that everyone underneath the king had the obligation to obey. And Locke argued instead that all people are born equal in the sight of God and that they should be able to consent to their own government, and that to really make that consent, they have to understand what they’re doing, so only people who are independent should be able to vote, [those] who can’t be influenced by others.

But that’s really the core of his argument. And it was pretty radical for what he was writing in 17th-century England compared to what had come before. I mean, for us, these are basic concepts that helped shape our government, core to the Declaration. But they were also radical to the revolutionaries. When Thomas Jefferson was reshaping those words — those principles — into the Declaration of Independence, many people regarded them — regarded him even — as crazy, including some other colonists who were loyal to the king.

Brewer: I don’t know. That’s a tough question. How do you know? There are other people who were making, advancing, similar propositions in England in the 1680s and ’90s — one of whom, Algernon Sidney, who was Jefferson’s other favorite political writer, had his head cut off for what he wrote. They actually found his papers, they accused him of treason, put him on trial, and executed him under James II. But most of the rest of the papers survived, and Thomas Jefferson read those. But none of the others were as — I want to say eloquent, but it’s more than that — none of them were as logically and analytically persuasive as Locke was.

He made everything so simple by assuming — he got everyone to assume that all the world was America — which for him was exotic, far away, a land that was full of possibilities. And what do you do when you have nobody enforcing things on you and you just have a group of people who can create their own government. What should it look like? And so he was able to pull away all these years of teaching that so many people had grown up with about natural order and make it all make sense. So, I’m not sure the American Revolution would have had the same power. I guess you could say maybe it wouldn’t even have been successful without that power. Words can be very powerful.