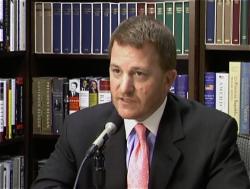 Since 2005, the North Carolina History Project has sought to shine a light on many of the resources and personalities in our state’s history that have been forgotten or neglected. Now the Raleigh-based History Project has expanded its work to a satellite office in Edenton. Dr. Troy Kickler, founding director of the N.C. History Project, discussed the issue with Donna Martinez for Carolina Journal Radio. (Click here to find a station near you or to learn about the weekly CJ Radio podcast.)

Martinez: I love history, and this is why I love to have you on the show. Remind us of the kinds of people and events that you focus on that sometimes don’t get a lot of play in other places.

Kickler: Right. Well, the North Carolina History Project was started for two reasons. One is to ask different questions about the past; one type of question is to see how the free markets or private sector has solved many of society’s problems. And the other is to preserve the ideas of the founding, to ensure that certain stories continue to be told. So lately there’s been a lot of emphasis on the Founding Fathers from North Carolina.

Martinez: And there are a wealth of people and events in our history that tend to kind of fade into the woodwork.

Martinez: But you are doing a really good job of bringing forth some of those stories. When you talk to people and educators and citizens, are they surprised to find out about the types of people that you’re telling them about?

Martinez: I know that you have been doing a lot of work and projects and talking to people all around the state, but you’ve been based out of Raleigh. You still are, but now you’re expanding. You’ve opened a new office in northeastern North Carolina.

Martinez: In Edenton. Tell us about that. Why Edenton?

Kickler: In Edenton. That’s a good question. Well, the satellite office will help the History Project further its outreach. But Edenton was a very important town during the Revolutionary era. I mean, many of North Carolina’s, America’s greatest thinkers, I think, came from Edenton. I refer to it as one of the intellectual capitals of what would become the United States of America. James Iredell, the man I mentioned before — he was from Edenton. Hugh Williamson was from Edenton. He was a delegate at the Continental Congress, and we can thank Hugh Williamson — he was the one who convinced others that a U.S. senator’s term should be six years instead of seven. All are from this little town. We have two signatories of the Declaration of Independence from Edenton. And so, having a satellite office in Edenton adds special significance to our work in trying to remind people about the original intent of the U.S. Constitution.

Martinez: Now your office in Edenton is located in what’s known as the Barker House.

Kickler: Well, the Barker House was the home of Penelope Barker, and she was what I call the mastermind of the Edenton Tea Party, which was the first organized political protest by women in the American colonies. And some people say it might be one of the earliest organized political protests by women in Western civilization. That might be stretching it a little bit too far.

Martinez: So it wasn’t just 1960 that women decided that somehow or another, they were going to start standing up for more rights. Way back in the 1700s in Edenton, North Carolina!

Kickler: And the first organized political activity by women was a tax protest. They were protesting the Tea Act, and women from Edenton signed a petition — which was a radical thing to do during that time, stepping into the public sphere — and they told King George III that they wouldn’t abide by the Tea Act.

Martinez: So was this in any way related to the event that we all learn about in elementary school, the Boston Tea Party?

Martinez: So what got the Edenton women so up in arms that they decided to do something that they had never done before? As you mentioned, signing a petition, that was considered pretty radical at the time for them.

Kickler: Yes. Nowadays, signing a petition, we consider it an important part of political participation, but it’s not radical. And that was a bold act. … Again, keep in mind it’s one of the intellectual capitals of the world. Many arguments have been made in Edenton, taking on [Sir William] Blackstone, and basically the idea that there shouldn’t be taxation without representation. I’m sure in the hallways and the dens of many houses there was much talk about what was happening with the tax legislation. So the men in Edenton were trying to boycott English goods, and the Edenton Tea petition was an effort of the women in Edenton to say that they were joining their husbands in this effort, and it was to tell King George III that they had to protest the tax so they could be true not only to themselves, but they had to do it for posterity, too, for their neighbors and so forth.

Martinez: Did they have an impact? Once they signed the petition and publicly said, “Hey, I’m with my husband,” what happened after that?

Kickler: Well, the petition was published in Virginia newspapers and made its way across the Atlantic and was published in English magazines [and] periodicals. Edenton was being talked about in London at the time. People were wondering: What in the world is happening in Edenton? Arthur Iredell wrote James Iredell and asked — they were brothers — and he said, “What is going on?” Basically he was asking, “Is there any sense of order left in Edenton?”

Martinez: Very interesting. Troy, one of the things that you do is travel about and really try to infuse life into North Carolina’s history, just like you’re doing here as we’re talking. You recently have been involved in constitutional workshops, a number of them around the state, with Michael Sanera of the John Locke Foundation as well. Tell us about those constitutional workshops. What have you been telling people, and what have they learned?

Kickler: Michael and I will literally have gone from one end of North Carolina to the other. There’s a demand for the constitutional workshops. But we remind people about the importance of state ratification conventions, and that is the key — James Madison said that is a key to understanding “original intent.” So there are two history lectures and two political science lectures, if you will. I talk about the history of North Carolina, the events in the Revolutionary era that led North Carolinians to sign the Halifax Resolves [and led] Americans to declare independence. I talk about the state ratification conventions, and then Michael Sanera talks about what the Founders meant by the elastic clauses — like the general welfare clause, necessary and proper [clause], and so forth.

Beware those ignoring facts that contradict their historical narratives