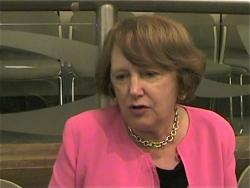 Advocates of free markets and limited government raised red flags before Congress approved federal health care legislation last year. Now that the ObamaCare legislation has been in place for a year, critics continue to question its value. Sally Pipes is president and CEO of the Pacific Research Institute and author of multiple books on the American health care system, including The Truth about ObamaCare. Pipes discussed the legislation’s impact with Mitch Kokai for Carolina Journal Radio. (Head to http://www.carolinajournal.com/cjradio/ to find a station near you or to learn about the weekly CJ Radio podcast.)

Kokai: What’s your current assessment of public response to ObamaCare?

Pipes: On March 23, 2010, President Obama signed The Patient Protection and Affordable Care Act into law, and the American people are still very upset by this act. Fifty-eight percent of Americans polled said they want full repeal of the Affordable Care Act, and interestingly in a Wall Street Journal poll after the election on November 2, 84 percent of people said they made a decision on how to vote because of ObamaCare. And, you know, a lot of Dems were turfed out of the House and out of the Senate, and it was mainly over ObamaCare and the takeover of our health care, moving more and more government into running the American health care system.

Kokai: What do you think it is about the legislation that bothers people so much?

Pipes: I think, as things unfold — you know, I like to say understanding health care is similar to unraveling an onion. There are many layers and many tearful moments. You know, the man on the street doesn’t understand health care, and maybe goes to the doctor, and then he gets a bill, and then he pays it, or his insurance company pays it. That’s what he thinks, and he doesn’t really know.

But I think when people like myself and all the people that have been fighting for empowering doctors and patients and not having the government get more involved in our health care, when people realized that there was going to be an individual mandate that they had to buy insurance, that we were not going to achieve universal coverage — the president said his two goals were universal coverage and bending the cost curve down. Well, the Congressional Budget Office said 23 million Americans will still be uninsured in 2019, and they talked about bending the cost curve down. The president said over and over again, “We’re going to reduce the average family’s premium by $2,500 a year.” Well, the Congressional Budget Office said, “Wrong. It’s going to increase by $2,100 a year.” And certainly, with the new controls that came on insurance companies on September 23, children being able to stay on their parents’ plans till 26, starting the reduction of no lifetime limits or annual caps, preventive care being free, no co-pays, the cost of insurance is going up 10 to 13 percent, employers are charging their employees more in terms of what they pay for premiums, and co-pays are going up as well.

And so the American people realize, “What is this? This is taking away our ability to get the kind of health care we like.” And Gallup just had a poll showing 82 percent of Americans rate the American health care system now as excellent or good.

Kokai: Most people agree American health care has some problems. Does this federal health care law do anything to address those problems?

Pipes: I really believe that this whole health care act should be repealed. It can’t be repealed until 2013, probably. The Republicans have got the House. They don’t have control of the Senate. … [The House] will go forward with repealing sections, like the 1099 reporting requirement for any transaction $600 or more, the class act, the long-term care act, the 2.3 percent medical device tax — a lot of these things — and then also push to starve funding for hiring 16,000 new IRS agents, putting $440 billion into Medicaid, the program for low-income Americans.

So I think the American people are really fully aware that — they know there are some problems. We all want affordable, accessible, quality care. The question is: How do we get there? And by getting the government more involved, people realize it’s not going to happen. They know what the post office does. They know how the DMV is run. We need to put doctors and patients in charge of their health care.

We need to make a few changes, get states to reduce some of these 2,100 mandates that we have across the country: in vitro fertilization, hair prostheses — all of these things that add 20 to 50 percent to the cost of an insurance package. Young people would buy insurance if they could get [a health savings account], set it up, carry it forward, and combine that with a high-deductible insurance plan to cover catastrophes. Get the states to do medical malpractice tort reform, because that costs about $212 billion a year. Docs do defensive medicine because they are afraid of being sued. Texas is a great example of a state that has capped noneconomic damages and punitive damages, and the cost of med-mal insurance has gone down for docs. So these are the things the American people like. Universal choice will lead to universal coverage in our health care, not more government.

Kokai: Is there anything salvageable in this legislation, or do we need to just get rid of the whole thing?

Pipes: My feeling would be to get rid of it all. It’s a huge movement of government into our lives, and not a single Republican voted for the Affordable Care Act, and Nancy Pelosi made that tremendous statement “We have to pass this bill so that we can find out what’s in it.” And that’s why I wrote my book, The Truth about ObamaCare. I thought, “I can write 240 pages and tell the American people what’s in it and what it means for them.”

Kokai: What should we do to address real health care problems?

Pipes: The real thing is that 60 percent of Americans get their health care through their employer. Government got us into this mess in the first place. Insurance isn’t affordable. You lose your job, and … you go out into the individual market. If you have any kind of pre-existing condition or a chronic condition, you might not be able to get insurance, or you might not be able to afford it. But you do have to buy it with after-tax dollars. We need to change the tax code to level that playing field. We need to allow people to buy insurance across state lines. You know, a young man living in New York that has to buy the most expensive insurance in the country, he may want to buy a plan in Arizona that suits his needs, but right now he can’t.

As I say, we need to do medical malpractice tort reform. We need to support a number of things that get doctors and patients back in charge. That will reduce the cost of care, and people will then go into the individual market, and it will grow. We will have competition, just like we do in banking or in our cell phones. Fifty percent of health care today is in the hands of government, and we don’t have a free market in health care.

Kokai: We’ve heard talk about consumer-driven health care. How do we get closer to a situation in which patients and consumers make more decisions about their health care?

Pipes: We’re not going to get to it under the Affordable Care Act. In fact, I think health savings accounts will probably be like the horse and carriage. They’ll be out of business because of the controls that the government is going to put at HHS on what is a viable insurance plan. So about 12 million Americans have HSAs. That’s called patient-centered health insurance. They like it, but it’s going to go away. The flexible savings accounts are going to be reduced from $5,000 to $2,500. So we want patients to be in charge. And in fact, the lowest cost increases in insurance are in consumer-driven, patient-centered health savings accounts and the catastrophic plans that go with them.

Kokai: Given where things stand now, how confident are you that the ship can turn away from more government involvement in health care?

Pipes: I do think that if the Republicans put up a candidate in 2012 who is a strong leader, who can herd all those individual cats who are politicians — and so they take the presidency, the Republicans, and they take Congress — I think early in 2013 would be the chance to go for “repeal and replace” with some of the ideas we’ve just talked about. People say, “Well, it can’t be done.” Medicare catastrophic [coverage] was repealed in 1989. [Former Democratic Illinois congressman] Dan Rostenkowski was run out of town. It can be done, but it’s going to take a strong leader and keeping up the pressure and keeping health care reform active in people’s minds.