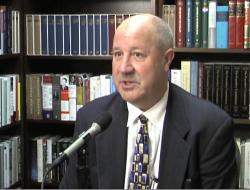 He left office more than 20 years ago, but the late President Ronald Reagan still exercises a major influence over American politics and public policy. Steven Hayward examines that influence in his two-volume narrative history of the 40th president, The Age of Reagan. Hayward, F.K. Weyerhauser Fellow in law and economics at the American Enterprise Institute and senior fellow at the Pacific Research Institute for Public Policy, discussed Reagan’s impact with Mitch Kokai for Carolina Journal Radio. (Click here to find a station near you or to learn about the weekly CJ Radio podcast.)

Kokai: Why does Reagan have so much of an influence over our politics and public policy?

Hayward: Well, I think he is just a large figure in every sense of the word. His personality was large, but especially his politics, and I think he ranks with Franklin Roosevelt as the other dominant, pivotal president of the 20th century. I mean, he changed our course in a number of ways, but over the last 20 years, since he left office, … a bit of confusion has arisen about him. Liberals start to like part of him, while disliking other parts, and conservatives sometimes want to remember the good parts and forget some of the more difficult parts of the Reagan administration, and have sort of lost their focus a little bit on him. So I wanted to write a long book that told the whole story, and not just parts of it, and directed our attention to some of the frustrations that are still frustrating to conservatives today. You know, how do we control big government? How do we restore the Constitution within its proper bounds? Those are questions Reagan wrestled with, with some successes, and with some failures, and with some ties.

Kokai: You called it a long book, and for those who haven’t seen it — actually, the two books together, if I count correctly, there’s about 1,500 pages on Ronald Reagan. What are some of the main things you learned during the course of your research that most people don’t really know about Reagan?

Hayward: Right. Well, I would say about both candidate Reagan in the ’70s and then President Reagan is part of his art was concealing how hard he worked, and how much he knew, and he did that for some odd reasons. One, he wanted Americans to have the feeling that the president had things under control, so one of his favorite jokes was, “You know, they say hard work never killed anyone, but I say, why take chances?” Turned out he worked really hard, often until midnight, reading documents, marking up speeches, writing his own speeches, and lots and lots of letters.

He was also a very disciplined person, in his practice, so people would say, “Gosh, Reagan doesn’t say anything in meetings.” And sometimes he did say a lot in meetings. That wasn’t universally true. But one of the reasons he didn’t say things in many meetings is that he didn’t want to read what he’d said in a newspaper the next day, because he hated leaks and knew that if he said anything important in a meeting, it would be in the paper the next day. That takes some real discipline on the part of a president to understand that.

So, you know, I think people who like to point to Reagan as their example ought to study really hard how he prepared for his speeches, the structure of his speeches — they’re often shorter than a lot of political speeches that people make today, like, you know, Bill Clinton, who can rival Fidel Castro sometimes, right? You know, there’s that — Reagan made it look so easy that I think we think that it should come easy to the rest of us, and it really doesn’t. He had to work very hard to be as good as he was.

Kokai: For those of us who are involved in this public policy world, it might also be interesting to note that Ronald Reagan, though known as — among those on the Left — as an “amiable dunce,” or a fellow who didn’t know much about things, really was very interested in the principles involved in policy, and the work of Bastiat and Hayek and those sorts of folks.

Hayward: That’s an extremely important point. I think what you’d say is Reagan was not an intellectual in the sort of ordinary sense we think of that term, but he was a man of ideas, and that’s a hugely important point. You know, he was a sponge for reading interesting studies and articles by leading conservative thinkers. He picked from a lot of conservative thinkers to have important posts in his administration, One of the best examples was Jeane Kirkpatrick, the [United Nations] ambassador, whom he picked because he loved her article in Commentary magazine … on “Dictatorships and Double Standards.” She was a Democrat, still, and [he] lured her over to the Republican Party. So he was very much alive to the world of ideas, and I think that also was a very important thing.

He wasn’t just a politician of tactics. I think the most important point about Reagan, if you look closely, is he really understood what he was trying to do as restoring the Founders’ understanding of our Constitution, and how the government ought to operate. In the 1970s, he used to like to say that even the way we now have administrative government and bureaucracy, that writes laws for us, has, he wrote, in effect repealed portions of the Constitution. He said in his first inaugural address that the government now operates in ways that extend beyond the consent of the governed, that great phrase from the Declaration of Independence, so he understood our problems. It’s not just bad policy, but bad constitutionalism.

Kokai: Some people who follow politics today and some of those who are listening to this program will say, “Gee, Reagan, Reagan, why are we hearing so much about Reagan?” What do we need to know about President Reagan and what he did that can affect and influence what we do today?

Hayward: Well, one of the things I point to in the book is what I’m calling, nowadays, Reagan’s unfinished agenda. In his second term, he understood that he had not been fully successful in controlling the growth of spending and the growth of government, and he worried that successive presidents after him would be even less resolved than he was to try and control the growth of government. He turned out to be completely right about that for presidents from both parties. So starting in 1987, he said, “I think we need to have five constitutional amendments.” Two he’d talked about a lot: a balanced budget amendment and a line-item veto for the president, so they could strip out pork barrel and earmarks, and things like that. But he had three others. He wanted a supermajority requirement, like two-thirds, for Congress to approve any tax increases. He said we ought to have a constitutional spending limit, so the federal government cannot spend over a certain amount of our economy, because they want to do more and more of that all the time. Then, finally, he said we ought to have a constitutional ban on wage and price controls. Now that’s the really interesting one, to me, because in the late ’80s, nobody was talking about bringing back wage and price controls. But here today, under President Obama, we’re controlling the wages of bankers, and if he has his way, we’ll soon be controlling all the prices of the health care sector, and not just some of the prices, as we do now.

Kokai: Speaking of wage and price controls and the Obama administration, an interesting story I heard about Ronald Reagan was that he delivered a speech to some former advisers, back in the late ’70s, before he became president, talking about how any Democrat who’s elected to be president, even if they want to govern as a moderate, they’re never going to be able to do it. What can you tell us about what he said about Democrats elected to be president?

Hayward: One of the things about Reagan that made him, I think, successful, especially in his first term, is that he campaigned very clearly on what he wanted to do. He said, “I want to cut taxes. I want to shrink government.” And he was very specific about his ideas. By contrast, the last three Democratic presidents — Jimmy Carter, Bill Clinton, and now Barack Obama — all campaigned as moderates, very vague about what they wanted to do, and even in the case of Carter and Clinton, who had some moderate instincts, the interest groups in their party, and the liberal leadership on Capitol Hill, pulled them relentlessly to the left. So, yeah, I mean, the Democratic Party — it’s impossible to govern as a centrist for very long, in the Democratic Party. The only reason Bill Clinton was able to move to the center is because he had a Republican Congress that made it possible. He wouldn’t have governed that way if the Democrats had kept control of Congress.

Hayward: I describe Reagan’s central political insight as being the idea that political power is a threat to liberty, both in its totalitarian forms, like the Soviet Union, but also in its supposedly benign forms, like big-government bureaucracy, and he expressed it that way a lot. See, a lot of the liberals who like Reagan try and make two Reagans out of him: the foreign policy Reagan, who they say was a closet liberal, which isn’t true, and this domestic-policy Reagan, who they don’t like because he was for tax cuts and small government. I argue that his statecraft on foreign and domestic policy have to be understood as a unity because he saw it as a unity, and all his ideas generated from that one insight applied across the board.

Nurses action in Asheville another sign unions are flexing muscles