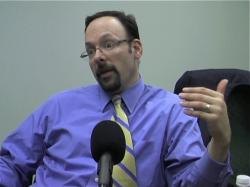 If you believe that government does a better job than free markets in protecting the environment, you might benefit from a conversation with Jonathan Adler, professor of law and director of the Center for Business Law and Regulation at Case Western Reserve University. Earlier this year, Adler explained to a Campbell University audience how market processes tend to work much better than regulation in helping the environment. Adler discussed the same themes with Mitch Kokai for Carolina Journal Radio. (Click here to find a station near you or to learn about the weekly CJ Radio podcast.)

Kokai: How tough is it to make this case — that leaving environmental protection to “greedy businessmen” is the way to go?

Adler: I think it’s very difficult for a couple reasons. One, people look around, and they see environmental problems, and they see a lot of environmental problems caused by market actors — caused by companies. And they, perhaps, understand that companies are responding to the incentives they face. It’s natural for a lot of people to attribute those incentives to the marketplace, as opposed to a lack of markets or the lack of institutions upon which markets are built — lack of property rights, in particular. So it can be very difficult. People also have a hard time with the idea that the pursuit of profit or the pursuit of personal gain can have positive environmental effects. So it can, unfortunately, be a difficult case to make.

Kokai: It’s difficult, so how do you make the case?

One example I sometimes use is looking at how companies deal with solid waste versus how most individuals and most households deal with solid waste. Most companies have to deal with that as something that they have to purchase [as] a service. They have to purchase waste disposal in some form. And so companies treat that like anything else that they have to pay for. It’s a cost. It’s a cost they’d like to see reduced. If they can find ways of paying less, if they can find ways of being more efficient in a way that reduces their residuals and reduces their need to buy solid waste services, they’ll do it.

Most people — in some jurisdictions, this isn’t the case — but more people are aware that most of the time — certainly in our homes — we don’t pay for solid waste services. At least, we don’t pay for what we use and are aware that, as a result, we don’t have the incentive to throw away less or to economize or to be more efficient in that way. I try to find examples like that, where people can see how the difference in the institutional arrangement — the presence of markets in one case, and the lack of markets in another — actually creates different sets of incentives, and actually show people that where we have more complete markets and better-protected property institutions, we tend to see incentives lining up in a better direction.

Kokai: I suspect that most people look back in the not-too-distant past and see how much better our environment is now, then credit the Environmental Protection Agency, the Clean Air Act, the Endangered Species Act. Are they wrong?

Adler: The real reason why a lot of environmental problems are better than they used to be — the true reason — some of that is simply the result of technological advance and the increasing drive for efficiency. … That was a total side benefit of just the drive for greater market efficiency. But a lot of it also is just a function of the preferences that people have. The reality is that over the 20th century, as people became wealthier — especially in the United States — and as our knowledge and understanding of certain types of environmental problems have improved, we have just generally — through all the institutions available — tried to do more for the environment. In some cases, that meant laws were enacted that helped. In some cases, that meant we did things privately. In some cases, it meant we did things through voluntary institutions.

That’s a way of recognizing that it’s not the laws produced improvements. It’s that we demanded improvements, and we got some improvements through the institutions that were available. But in a lot of cases, the laws — and, especially, the regulations — got in the way or made it a lot more difficult than it needed to be.

Kokai: Do people discount the importance to business of reducing waste, cutting costs, and reducing the likelihood of byproducts as they produced their goods?

Adler: Some people discount that because they don’t have the experience with business or aren’t really aware of what it means to try to produce a good or service in a competitive marketplace. I think for a lot of people it’s just a lack of trust. They have an idea in their mind of an entrepreneur, of a businessman, as being someone only worried about money and not worried about these other goods or these other things that matter to us — environmental protection, or what have you. So they’re worried about putting trust in the businessman. What I’m really saying is, “No, you want to be putting more trust into [the fact] that people respond to incentives.” If you have institutions that create better incentives, even the people that are only concerned about profit are going to behave in a better way. The other thing I try to point out is however bad people want to think business leaders are and corporations are, the question is: Compared to what? I think at this point we need to start to learn that regulators aren’t always well-intentioned. Regulators aren’t always better-informed. They don’t always have better information. They don’t always have better incentives. As a consequence, there’s no more reason to put faith in them to get it right and to do the things we want them to do than businesses. The real question is what the institutional incentives are that we have set up.

Kokai: If you had a chance to change the system that’s in place now for protecting the environment, what would be the first thing you would change?

Adler: I think increasing the protection of property rights has to be way up there. I say that for a bunch of reasons. One is because the more secure rights are, the more room that creates for individuals and groups to advance whatever their values are. In the United States today, people care more about the environment — more than they did 100 years ago. If you protect their property rights more, they will have a greater ability to advance their environmental values through property rights, through acquiring and protecting properties.

I also think that the more property rights are protected from government, then the more policy makers will have to think about ways of advancing environmental goals that don’t infringe upon property rights and don’t undermine the institutions that are actually the foundation of environmental stewardship. Unfortunately, if regulating property and commandeering private property is free to the government, and working with property — acquiring it, renting it, leasing it, providing incentives, what have you — is costly, it’s only natural that government is going to overuse the free or the underpriced good. It will do so even when that results in worse environmental consequences or worse environmental results. Protecting property rights is not just about creating better incentives for the private sector. It’s also about creating better incentives for government.